Once again Karachi suffers urban flooding as heavy rain lashes the city. Tremendous damage caused to the city’s infrastructure. Major roads of Karachi have been locked for hours and are resulting in traffic jams on major streets including Shahrah e Faisal, I.I., and Chundrigar Road.

Karachi’s roads and localities flooding with sewage-mixed rainwater has become more of an annual ritual now. Not only that but also the power outrage as soon as the rain starts pouring. 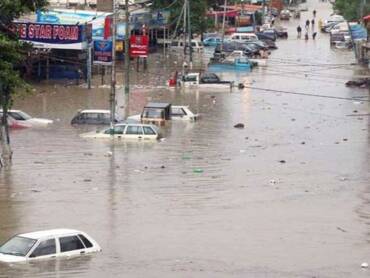 Besides the infrastructure getting damaged, many cars and motorcycles were seen breaking down because of being on waterlogged roads. In addition to this, there is least 1.5-foot deep rainwater on the roads with traffic coming to a halt.

Hats off to Karachi Traffic Police!

However, even during this difficult time and negligence by the authorities, there are some people who try to do their job with the utmost honesty.

We are all so quick to jump on the bandwagon to criticize police officers when they take a bribe or misbehave with people. However, we rarely witness any appreciation for a gesture by the same traffic police force in these difficult times.

Hats off to Karachi Traffic Police for their exceptional devotion towards duty in rain. They are often criticized but Karachi traffic cops proved to be the real heroes in such raining weather. Sure, it is their job to control the traffic but to work at such times with a massive amount of traffic and the roads filled with water is certainly more than just doing their job.

The traffic cop you see is a great example of showing immense devotion to duty. According to the tweet, the picture is taken on the busiest road of Karachi, namely, Shahrah e Faisal. He could have simply run off and taken shelter somewhere. However, this man stood there and did his job.

A good example of devotion to duty of Karachi cop, soaked in rain, on the usually busy Shahrah e Faisal as parts of Pakistan’s biggest metropolis are drowned due to torrential rains! Karachi’s citizens earn highest revenue of any city, but are at receiving end during emergencies pic.twitter.com/FD9bglvwoI

People are super impressed and are appreciating this man.

Respect For This Traffic Police Constable During Heavy Rain In Karachi.❤ pic.twitter.com/5avcNvsXzM

Truly, all fingers are alike but not equal.

These are the actions that should be appreciated, rather than labelling all the traffic police as one. Many cops are seen helping and rescuing because in these difficult times. 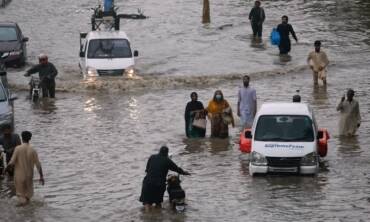 Not only are they saving people but these cops are also going beyond their duty to ensure smooth flow of traffic. In addition to this, let’s not forget the cars splashing water at these cops who are working amidst heavy rainfall.

If we are quick enough to call out and bash these traffic cops for their mistakes, we should appreciate and encourage their good deeds as well. Needless to say, they deserve tremendous respect for working for good of the society. That too, while a deadly outbreak is going on.

These cops need to be recognized for their pure dedication. Mad respect for the Karachi Traffic Police!