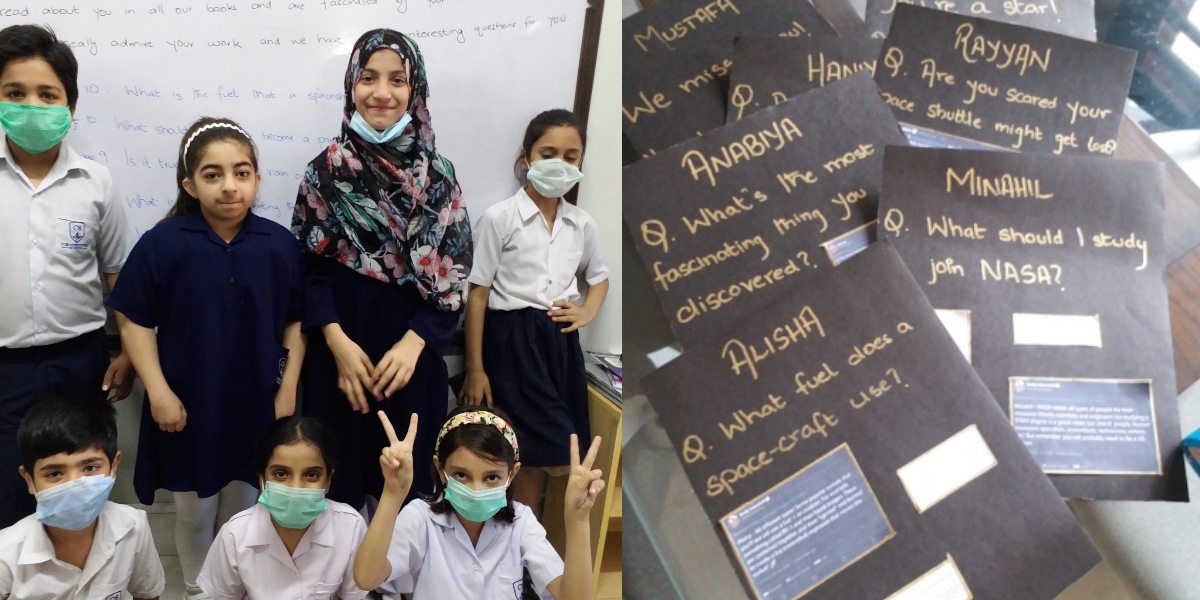 Fourth grade students from The Cornerstone School in Karachi got the biggest surprise of their lives after they got replies to the letter they wrote to NASA scientists. They got replies from an astronaut and a space expert.

The students asked questions to NASA regarding their adventures in space. Their teacher posted their questions on Twitter. The teacher tagged NASA and a few astronauts in the hope to get a response.

The letter was retweeted by more than 1,000 people. Eventually, multiple astronauts and space experts replied. Given below are replies from Emily Calandrelli, an American science communicator and the host of exploration Outer Space and Emily’s Wonder Lab.

Details of the reply by NASA astronauts to the students

Here are the details of the questions by Karachi students and the subsequent replies by the astronauts and Nasa scientists.

Alisha, age 10: What fuel does a spaceship use?

All different types! Some popular rockets that you’ll see will use a fuel + an oxidizer. For example, something called RP-1 and then liquid oxygen. These are combined together and then *ignited* and burned to create a big (controlled) explosion that moves the rocket!

Minahil, age 10: What should I study to become a part of NASA?

NASA needs all types of people for their missions! Mostly scientists and engineers (so studying a STEM degree is a good idea!) but also IT people, human resources specialists, accountants, technicians, writers, etc! But remember you will probably need to be a US citizen

Haniyah, age 9: Is it true that it rains diamonds on Jupiter?

It’s definitely possible!! The same physics and chemistry that creates diamonds here on Earth (putting Carbon under super high heat/pressure) exists on planets like Jupiter, so some scientists hypothesize that it’s raining diamonds there! Wouldn’t it be fun to see that?!

Mahrukh, age 10: How do you feel when you get blasted off in a space shuttle?

Canadian astronaut Chris Hadfield also replied to Mahrukh’s question and spoke about how it felt in a space shuttle.

He also got a direct reply from the control center of Ariane 6. It is a launch system developed and manufactured under the authority of the European Space Agency.

The teacher of the fourth grade students shared details of the reply she received from NASA on her twitter account.

The questions by the fourth grade students and the subsequent reply from NASA is indeed a positive news for all Pakistanis. It illustrates how curious and eager our youth is for learning important scientific concepts.

In September, Fawad Chaudhry announced that Pakistan has set a marker to send its first-ever astronaut to space by 2022. The selection process will kickstart in 2020 and a total of 50 participants will be selected initially. Once the program begins, the list will be narrowed down to 25 in 2022.

The fact can’t be denied that STEM education is the future. It is the responsibility of the parents and the government to encourage curiosity for science and technology among students.