With monsoon rains, come more misery for the citizens of Karachi like power cuts and urban flooding. While the citizens wait for this season very eagerly, when it starts, they pray for it to end soon. The heavy rainfall in the city only seems to exacerbate the misery rather than bring joy.

Every year in the monsoon season, the people of Karachi face water-clogged streets, flooded roads, traffic jams, and the never-ending powercuts. Despite the earliest predictions of rain, no preemptive measure is taken by the authorities. 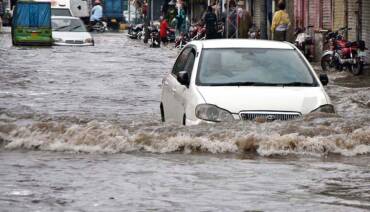 On Monday, the second straight day of rain coming down in torrents, many roads in Karachi turned into rivers. At least five people lost their lives to it. Moreover, Karachi’s Orangi Town had been completely inundated after the third spell on monsoon rain began.

May #Allah help the sufferers and victims of Orangi Town Karachi
Aameeen.
This is heartbreaking….the homes, the streets, the infrastructure of the vicinity 🙏🏻 and above all the health n hygiene of our people 😞#PPPGovtDestroyedKhi #BadGovernanceInKarachi#FloodedKarachi pic.twitter.com/9wIPRYbHfF

Residents of the town took it to social media to give voice to their anger about the severe devastation caused by the downpour. In addition to this, they also shared videos that showcase rainwater mixed with sewage surging through narrow alleys. People used boats to cross the roads. Moreover, cars floating away on flooded roads could be seen as if they were made of plastic.

In the heavy downpour yesterday, young girls of a madrasa in Orangi Town got stuck inside. While their lives were at risk yesterday, the government failed to take any action to rescue them. 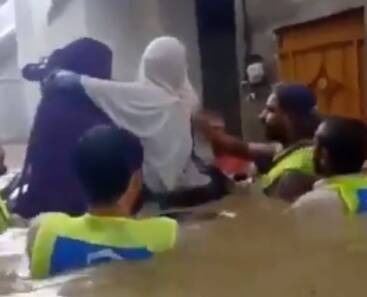 Earlier today, a video surfaced on the Internet which showed volunteers of the Al-Khidmat rescuing these madrasa students. When the area needed an urgent rescue operation, it was Al-Khidmat Foundation, an NGO that came to the rescue rather than the government.

A group of distressed young girls was saved from a madrasa, located on a backstreet where several feet of rainwater had accumulated. In addition to this, four to five feet deep water gathered in the low-lying areas of Orangi Town, and the filthy sewage entered homes.

On Monday, Sindh Minister for Local Government Nasir Hussain Shah claimed that he had dispatched machinery and equipment across the city to deal with the rain and will be visiting areas himself.

Turkish Actress Esra Bilgic Has Found Her ‘No 1’ In Pakistan. Who Is He?
Javeria & Saud Take Legal Action Against Salma Zafar – Reject Cheating Allegations
To Top