Kamran "Drop Machine" Akmal was Trolled by the Internet on the Picture of him and his Newborn!

The right-hand batsman and former wicketkeeper Kamran Akmal gears a lot of attention regarding one aspect of his performance – dropping catches. Be it a one-day international or a test series match or in a domestic league, Akmal made it to the headlines all over the cricket world for dropping a countless number of catches.

Despite that, Akmal has proven to be vital for Pakistan cricket team and hopes to make a comeback as well. For now, he is celebrating the addition of the newest family member in the Akmal household.

Alhamdulliah i m blessed with a baby girl again Allah has open the doors of his rehmat again on me feeling blessed ? pic.twitter.com/112L8hFZY2

Akmal, who has already been blessed with a daughter and a son, recently welcomed a newborn baby girl.

While the internet blessed him and his family with all the best wishes, he was trolled just for the sake of fun. Notice the way Akmal’s son Ayyan kept a hand under the newborn. The internet fanatics trolled Akmal and brought his habit of dropping catches frequently. 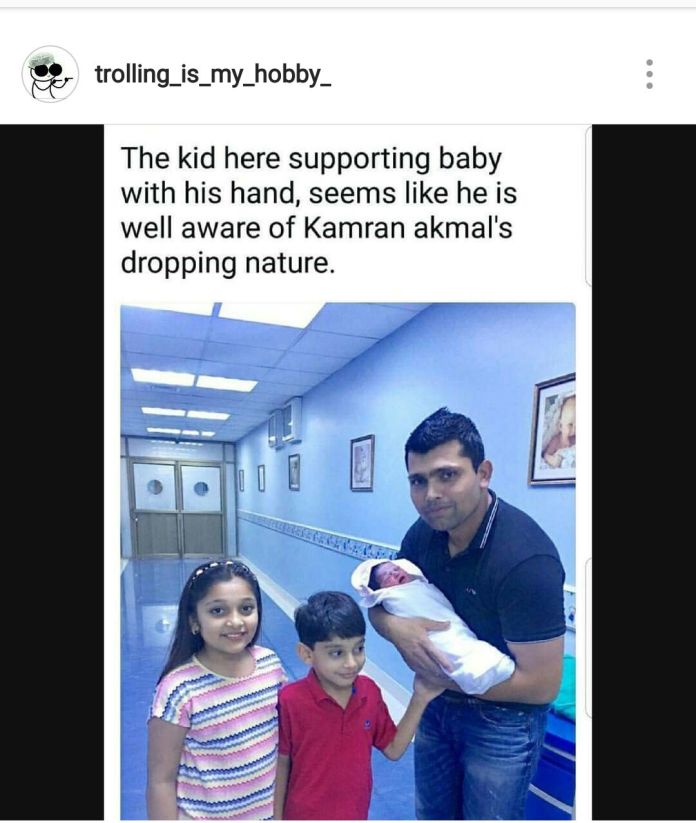 And Then it All Started

Does the kid have his hand under the baby girl just in case Kamran Akmal drops her too? pic.twitter.com/JIklNsCwB6

The kid here supporting baby with his hand, seems like he is well aware of Kamran akmal's dropping nature. pic.twitter.com/upmvzebd0x

? Even Kamran Akmal's son knows that the former Pakistan wicket-keeper loves a drop or two. pic.twitter.com/0uJtZHMlVk

His Son Making sure he Holds the baby if Kami Drops him … -'_'- pic.twitter.com/Dt0T4mHAgk

All jokes aside, during such a happy moment, remember to keep blessing someone with all the best wishes, especially when they are welcoming a new life on this earth. While the majority were busy trolling, well-wishers also made his day special for him.

Wishing Kamran Akmal all the best for his future and may Allah grant his daughter with ultimate success in her life, Ameen!

According to Surah Al-Hujurat, These are the Five Traits Muslims Need to Give Up
انڈیا کے ڈپارٹمنٹل اسٹور میں چور کی دبنگ انداز میں انٹری
To Top