The PSL Final in Karachi, one of fondest memories which will be relived in the city for years, saw Islamabad United be crowned as champions for the second time. A tough fought encounter saw Faheem Ashraf score the winning six of the match, after Asif Ali had already killed Peshawar’s dreams.

Kamran Akmal, the man who arguably got Peshawar Zalmi into the final single-handed, failed to show up in the big game with the bat, and sadly, the gloves too. Islamabad United’s Ronchi destroyed Zalmi’s bowling attack, giving them no hope. However, after his dismissal, the middle order somewhat collapsed, and the match was finally in a twist. 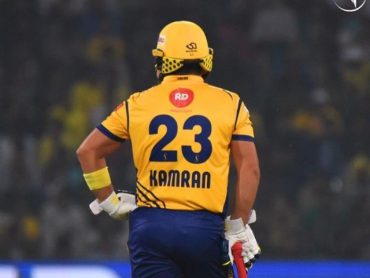 With 29 runs needed on 33 balls and only 4 wickets left, the moment of the match happened. Asif Ali top edged an Umaid ball, which was chased by the keeper, Kamran Akmal. Out of position and not his catch, Kamran Akmal misjudged the ball and dropped the catch, and also the match. The internet was watching and as you know, they never forgive a mistake. After that, Asif Ali went on to score 26 runs off just 6 balls, hitting 4 sixes.

Sammy will never forgive Kamran Akmal for that drop catch

Sammy: We are going to win this
Kamran Akmal: No pic.twitter.com/ptRunJ1Otq

Kamran Akmal receiving SAFE HANDS award on behalf of @KumarSanga2 .. Sanga I hope you wont commit suicide after that pic.twitter.com/zBfEzUIUTp

First of all I would like to kill kamran Akmal ………
????#PSLFinalInKarachi pic.twitter.com/Qm4db7nV5T

‘How many times have you dropped important catches?’
Kamran Akmal: pic.twitter.com/NdrLSXH5On

A timely reminder of why Kamran Akmal, for all his PSL batting heroics, should never ever be allowed anywhere near the Pakistan team

Kamran akmal is like the student version of every pakistani kid, studying hard from past 4 hrs, grabs phone for a minute, father walks in the room and BAM.

After playing brilliantly throughout the PSL, Kamran Akmal has chosen the the most important day and moment, the final of PSL to remind us why he must be kept away from Pak cricket team. #ThankYouKamranAkmal

Let’s stop for a moment and applause the legend Kamran Akmal pulling off his trademark move in the big final! pic.twitter.com/qzZP8oR1Tq

And the list could have gone on and on and on and on, but deep inside our hearts, we all love Kami bhai! Peshawar and cricket fans need to realize that Kamran Akmal made Zalmi reach the final, as he also won the golden bat for highest runs scored in the tournament. However, it is safe to say, Kamran Akmal will not be ‘catching’ sleep anytime soon!