Karachi just saw another case of the grip and courage the ‘kabza mafia’ in the city has. In a recent case of acid attack, two women had to suffer the worst after confronting Karachi’s kabza mafia to return a plot under dispute.

The incident which took place in Karachi’s Shah Latif town has gone viral on social media. Allegedly, two women, Keri Baloch and Zeenat, had gone to the house of a woman named Asma.

The women had reached Asma’s house because she, along with her brother, had forcefully taken over the women’s plot in Karachi. Both Keri and Zeenat had thought, they would confront Asma and strike a deal with her, with whatever money involved. However, both the women were adamant on finding a solution to regain their plot. 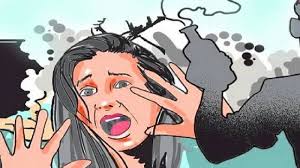 Instead, Asma and her brothers had other ideas. Instead of talking and solving the issue, Asma, along with her brother, threw acid on both women in this case of kabza mafia. This resulted in serious burns and injuries for both women, who did not in their wildest dreams imagine such a scenario. Both women were sent to the Civil Hospital Burns ward later on.

Since then, the police took notice of the incident and on Zeenat’s witnessing, filed a case against the siblings for their actions. After the initial investigation, Asma’s brother was arrested while Asma is still on the run.

Committing such a sinister act without any consequences has become a norm in our society. Acid attacks in Pakistan, in the last decade, have increased in large numbers. Oscar-winning director/producer Sharmeen Obaid Chinoy’s ‘Saving Faces’ on the same issue, landed her an Oscar for the documentary.

Acid attacks are not a hidden truth in Pakistan. Every year, hundreds of women suffer a similar fate in the name of honor or revenge. It is time that Pakistan upgraded its acid attack laws and provided extremely strict punishment for the perpetrators.