Remember the pigeon who was allegedly branded a spy from Pakistan by India? Well, shortly after being caught, it was shackled in captivation. Following that, nobody knew where the poor bird went or even if was alive this entire while.

A news came that the pigeon escaped captivation and now has made its way into Pakistan in full James Bond-style. It was kept in a bird cage with high security all the while it remained in India.

But could any amount of security keep our buddy from escaping?

What do Indians have to say?

Indian officials were put in charge of keeping an eye on the alleged Pakistani spy pigeon. But not only the pigeon escaped India, it has gone nowhere other than Pakistan – adding to further insult of India.

The Indian intelligence agency captured the pigeon that was accused of “infiltrating” their nation from across the border. The authorities from India openly claim that it has flown back to Pakistan.

“The bird escaped when the head constable opened the cage out of curiosity,” reported the Indian Express.

“Authorities have been alerted.”

Indian police further claimed that it took more than 2 hours to capture the alleged pigeon. It carried a tag of “5547 Janbaz Khan” with a phone number too from some district situated along the borders of Punjab & Rajasthan in India.

“The brains of such high-flying birds are tuned in a manner that they remember their loft. She could have flown and crossed back to Pakistan,” said an India-based bird lover, Ramanjeet Singh, who had been handed a pigeon by Indian police once.

“This is not the first time such news has come to light. In the past, numerous birds – falcons included – have been captured with ‘suspected links to Pakistan’,”  reported by the Indian Express. 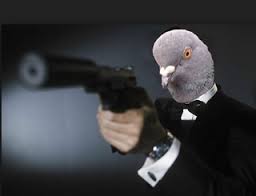 Well, the Indians have another token in the warren of stress they must be handling. They must be thinking Pakistanis wjust don’t stop being a nuisance for them.

See, India, even pigeons from Pakistan are making all of your lives miserable now.

As for the pigeon, we welcome our legend back.

Cometh the legend, cometh the pigeon; we’re sure the pigeon made its entry into Pakistan somewhat like:

What do you think about a spy pigeon from Pakistan that our noisy neighbors keep talking about? Is it true that we keep spy pigeons and get India’s heads spinning after them?

[QUIZ] – Who Will Be Your Valentine This Year?
Here’s Why You Will Stay Single This Valentine’s Day As Well!
To Top