Child sexual abuse cases have always been in the limelight, with a new case surfacing on social media every now and then. This time, an 8-year-old girl Madiha was ostensibly discovered dead in the bushes.

Reports depict that the victim was subjected to being raped and then tortured to death. 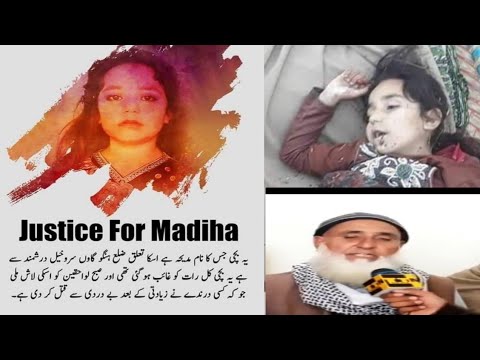 The definition of rape as quoted by Merriam Webster states: “unlawful sexual activity and usually sexual intercourse carried out forcibly or under threat of injury against a person’s will or with a person who is beneath a certain age or incapable of valid consent because of mental illness, mental deficiency, intoxication, unconsciousness, or deception.”

According to the media reports, Madiha was found missing, this Saturday afternoon. Moreover, as the villagers went on to search for her, to their horror, she was found dead in Saro Khel village, Hangu District, Khyber Pakhtunkhwa, the next day. More news reports depicted that the girl had a bullet hole visible in her head. With that, demanding justice for Madiha, the villagers and family members had blocked the main road, protesting under #JusticeForMadiha.

With the news of Madiha’s murder circulating on twitter and other social media platforms. The citizens of the nation lashed out on social media platforms by showing their concerns regarding child sexual abuse. The hashtags #JusticeforMadiha and #HangtheRapists seemingly got viral within hours.

I'm in deep heart broking 😭😭
Another day, another Justice
for trend! Won't be the last if we
don't ensure rule of law.#justiceformadiha#hangTheRapists pic.twitter.com/Ct26b6qg9X

Moreover, @Abasmil tweeted: “Everyone is requested to raise the voice of #Madiha and hang their killers immediately, please.”

Every one is requested to raise the voice of #Madiha and hang their killers immediately please #justiceforMadiha#UNFocusPTMLongMarch2DIK pic.twitter.com/VN1n8KHv2e

However, some people involved including Pakistan’s Federal Minister for Human Rights, Shireen Mazari. For instance, Twitter user @1947Umair tweeted in his post saying: “Another day. Another child. Where is the @ShireenMazari1? Don’t you have any responsibility? #JusticeForMadiha”

Shireen Mazari did not respond to any of these tweets. Moreover, it is known that Mazari had failed to take any appropriate action against these cases of violence.

It should be known that most of the rape cases emerge from minor areas like recently the incidents of Kasur and of Abbottabad have also drawn attention.

As a nation, we should stand up against child sexual abuse by appealing to the government and the necessary authorities. Actions like publicly hanging Child abusers should be taken so that in the mere future, no more girls like Madiha would have to lose their life.

Recently, the National Assembly passed a bill for the public execution of child rapists.

What are your comments on this topic? Please share your insight.