Did You Watch Jupiter & Saturn Show Off In Sky Last Night? It Happened After 20 Years 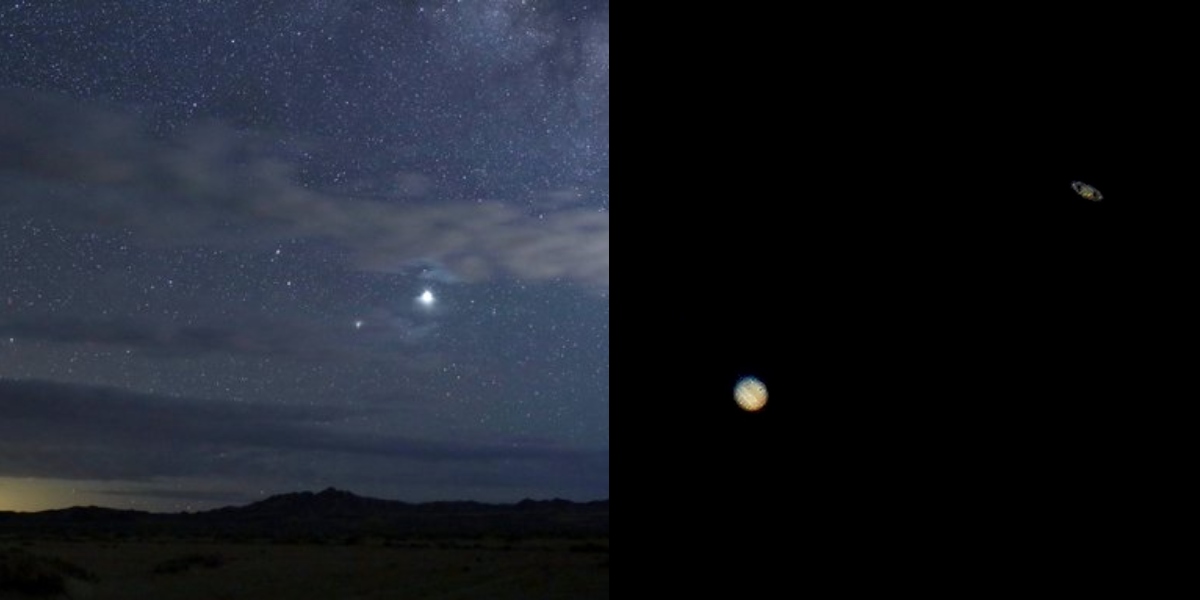 A special astronomical event occurred on Monday night that fascinated humans all across the world. A unique conjunction of two of the biggest planets in the universe, Jupiter and Saturn, huddled closer together and show off in the night sky for a magnificent spectacle.

Astronomers use the word conjunction to describe meetings of planets and other objects on our sky’s dome.

Both the planets aligned in such a manner that they were approximately 0.1 degrees apart. The incredible conjunction was seen all across the world, including Pakistan.

The conjunction was also shared by The National Aeronautics and Space Administration (NASA) on their official twitter account.

According to NASA, Jupiter-Saturn conjunctions happen every 20 years; the last one was in the year 2000. But these conjunctions aren’t all created equal. The 2020 great conjunction of Jupiter and Saturn as it shows off in the sky has been the closest since July 16, 1623.

It was back in 1610 when Galileo discovered a strange oval surrounding Saturn. The later observations determined to be its rings.

Such important discoveries have changed how people understand the far reaches of our solar system.

According to Florent Deleflie from the Paris Observatory, looking through a telescope or even a good pair of binoculars, Jupiter and Saturn were separated by no more than a fifth of the diameter of a full moon.

But with the naked eye, they would merge into a highly luminous double planet.

People can see the planets even with binoculars, says Deleflie

Deleflie also said that with a small instrument, even with a small pair of binoculars, people can see Jupiter’s equatorial bands and its main satellites and Saturn’s rings.

This “great conjunction”, as it is known to astronomers, occurs during the winters for those living in the Northern Hemisphere and the beginning of summer in the global south.

The two planets are just over 730 million kilometers (400 million miles) apart. But because of their alignment in relation to Earth, they appear to be closer to each other than at any time in almost 400 years.

The planets remain hundreds of millions of miles apart in space. However, from our vantage point on Earth, the huge gas giants appear very close together. Such conjunctions are indeed fascinating for people interested to view the beauty of outer space.

The next Great Conjunction between the two planets – although not nearly as close together – is due in November 2040. However, an alignment similar to December 2020 will not take place until March 2080.

All New Realme 7i Is Power Packed With 64 MP Camera, 90Hz Display & Premium Design Language At Just Rs. 39,999
‘Sheikh Rashid Is Like Brother’ – Hareem Shah Clarifies & Advises Him To Get Married Soon
To Top