Junoon – The Boys Are Back With An Epic Show Like Never Before!

There are some memories that remain vividly fresh in our mind and are never replaced or affected by anything. And when those memories are the one that makes you happy consider them blessings, for they become the happy place deep in our consciousness. It was a fine April evening in 2002, perhaps the 17th when I got an opportunity to attend Roger Waters’ concert here in Dubai. Roger was on his In The Flesh world tour, and I guess it was a case of being at the right place at the right time – blessings, indeed.

What was interesting and arresting was the matter of fact that I was a 27-year-old guy who just got married to the love of my life and was attending the concert my second musical love peer saein hazarat Roger Waters, with my wife. I was over the moon and considered this happenstance as an accomplishment. The whole arena was filled with mostly people over or around 50ish and they flocked in from as far as South Africa and other neighboring countries to attend the must await concert of their lives it was one of the happiest days of my life…

Reliving the same experience one of my favorite Pakistani music act Junoon did a reunion concert at the  Dubai’s Tennis stadium. The gate opening time was given at 7 pm and the show would start at 9 pm. So I went to the nearby mosque to attend Isha’a which was in progress and around 7:50 I went into the venue. The Dubai tennis stadium was barely filled with the fans and the whole of the front VVIP are was totally vacant. 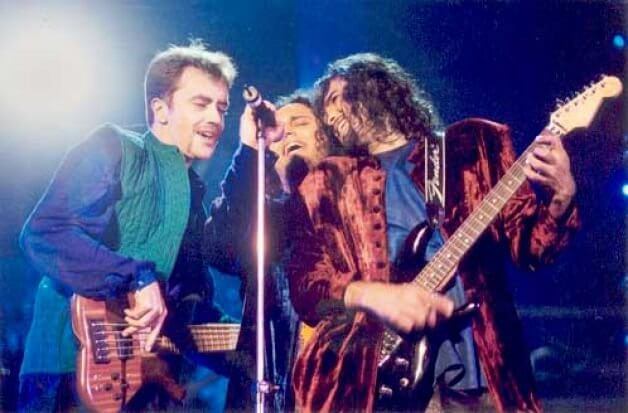 My mind was reeling back to my reckless days in the early ’90s in Pakistan. Junoon emerged as the only capable live act and despite the low quality (production/ sound wise) of their first self-titled album – Junoon, the band was able to make crowd swing with its live act. Songs like Chori Chori and Jogia with a dholak and guitar riffs were good enough to kick start the concert. Neend Aati Nahin had a special extended version for concerts only and my favorite Rangoon Mein Khoya were real gems. I never visited the gym then, however at Junoon concert, I never came out high and dry, in fact, it always was drenched in sweat, body aching with head banging and of course high experience along with the exhilarating 4 piece band performance.

The duo Salman and Ali weathered the storm and stayed focus to launch of their next album as other band members: Nusrat Hussain had to continue his career with PIA and Asad Ahmed on bass was commissioned as a session player. Salman invited his schoolfellow, Brian O’ Connell with his 5- stinger bass added new dynamics to band’s intended sound. The result was an edgier sounded second album Talaash. While Nirvana and Pearl Jam elaborated social issues in the USA with their grunge and angst, Junoon in Pakistan rebelled against the socio-political stagnation in search of an identity and way forwardness. 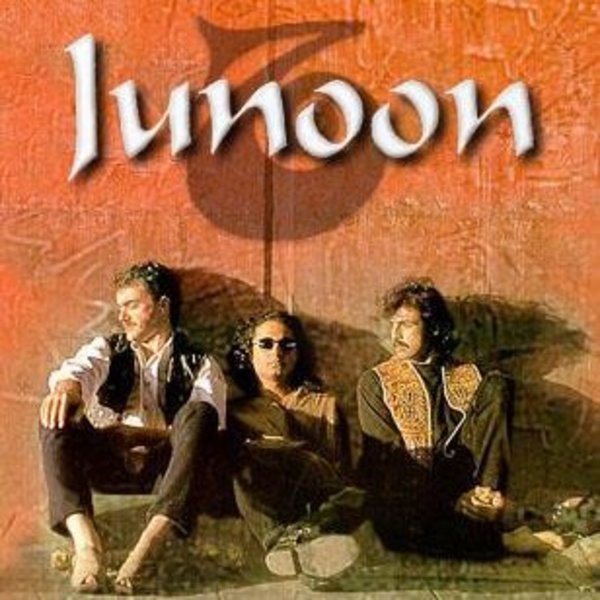 The title track, Talaash fused in qawali was not only an angry rock song heavily laden with political overtones. it was also blessed with Salman’s ball-to-the wall heavy riffs and chord jamming. The song also tested the vocal strengths of Ali Azmat making him the rock star. Soon Junoon was on the road, gathering their cult following. I was among them following Junoon from Baharia Auditorium to FTC and Alliance Francaise in Karachi.

Even though Vital Signs was the most accessible band in every household, Junoon cemented the love for the music in angst-ridden youth. The music industry started to develop and lots of bands emerged just because youth now seeing music as the fourth career option for their livelihood, other than being an engineer, doctor, and business graduates, there was a silver lining that became clear and clearer!

Junoon continued to drop their albums one after another. Brilliantly groovy Inquilaab, reminiscing doors included the national anthem, Jazba-e-Junoon, Mera Mahi, Sufi rock – Saeein and a punchy Husun Walo became the concert’s staple songs. The trio with the addition of Malcolm Goveas on drums and Ustaad Ashiq Ali were in unison and belted out some of the most known songs in the history of Pakistan. Junoon was no longer a local a band they were hailed as U2 of Asia. The band also became responsible to coin a new genre in rock music, as “Sufi Rock”!

Their next album Azaadi sans drums and only relying upon Ustaad Ashiq Ali’s relentless tabla and dholaks catapulted the band to newer heights. Melodious Sayonee followed by Khudi based on the Allama Iqbal’s demi-God Shaheen and Led Zeppelin-inspired Yaar Bina, broaden the band’s reach. Junoon was able to win the most coveted Channel V and MTV awards.

On the day of the concert, I arrived from freezing cold Glasgow which was engulfed with the Atlantic gales. Back in Dubai, I knew the temperature was just right and pleasant especially at this time of the year. Yet, ironically I was feeling the chill, perhaps out of anticipation or maybe it was the desert’s damn cold. However, around me slowly and surely the crowd started to pour in and yes, your guess is as good as mine, most of the fans were over 40. I could feel the nostalgia that swings with age and evoked my earlier experience when years back Roger Waters played in Dubai with the plethora of crowd over 50, burgeoning to relive their past.

Clearly, I remember the last concert I attended was in the open air Alhamra Arts Council in Lahore. Junoon gave their superlative performance on the launch of their fifth studio album, Parvaaz. It was also my favorite Junoon’s album, musically exploring Pink Floyd’s, psychedelic sounds and inspired of Bulleh Shah’s poetry including spacey tracks like Bulleya, Ab to Jaag, Aleph, and Mitti were treat to the ears. And of course, a special mention to the sonic attack from Ghoom was the pure sufist’s nirvana. 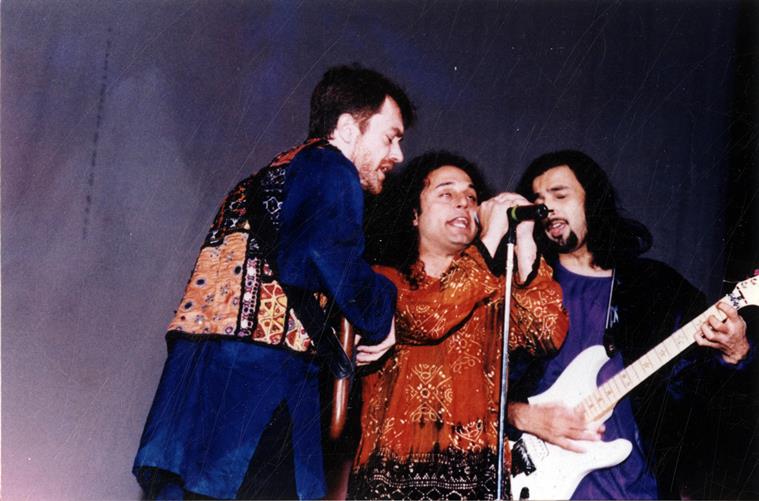 In my mind, I was struggling to create my own set list of songs that I thought Junoon would perform. The catalog contains song list of 6 studio albums spanning 14 years, could be the most challenging guess. The inclusion and exclusion of one song over others were like a nail-biting effort. Thankfully the Dubai Tennis stadium lights turned low and the stage lights started to sparkle. The moments started to close-in as exactly at 9 pm sharp the MOC, Sobia introduced the show. The show was opened by forgettable 4 female only member Coke Studio artist Irtiaash in conjunction with Salman’s sons.

A monologue from Inquilaab in Peeru’s voice ( I guess) and countdown on the background screen signaled the arrival of Junoon. The band entry was welcomed by endless and cheers and whistles by the fans. The entire stadium now filled with capacity over 6300 lucky Junoonis rose to their feet. The concert kicked off with a surprise opening song Junoon say aur Ishq say which is mashed up with fast-paced Zamanay kai Andaaz.  Without having a gap the young and energetic new drummer from Tappan, New York cue-in Mera Mahi. The feel of the cold was already long gone, as no one seems to stop and the crowd was duly participating with every song only confirming that these tunes were etched on the hearts. 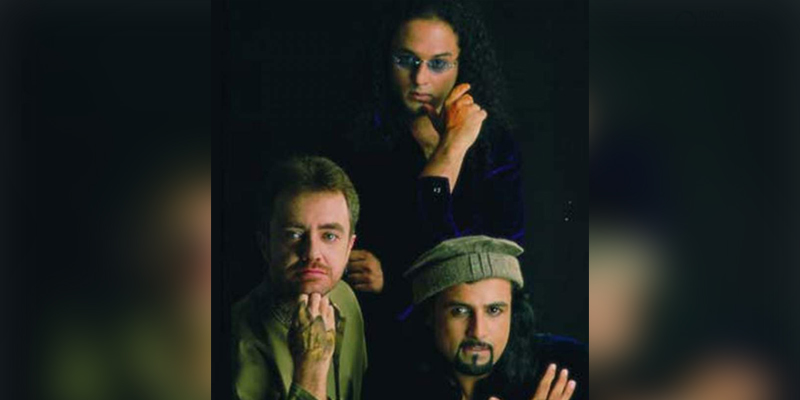 Ali Azmat with his effervescence style engaged the crowd on every song. Neend Aati Nahi was the next one. He belted out non-stop one song after another, and on every song, the crowd was singing along. Salman walks down the ramp to show off the crowd when his lead part comes to make the whole stadium roar and the new kids would follow Salman’s lead by their air guitar playing.

During the concert Salman made numerous announcements, thanking the Dubai’s Minister present there. He also thanked the fans who have come from Singapore, USA, Canada, India, and Bangladesh.  But the notable announcement he made, was an acknowledgment of a fact. He told “Tonight this is my dedication to Mr. Ali Azmat and Mr. Brian O’Connell for past 15 years…” and he started to strum the opening notes of Sayonee. The crowd went absolute bonkers.

I have never witnessed such commitment with band and more so with Ali Azmat, as we’ve all seen the Coke Studio’s Sayonee version debacle, the crowd responded with an undoubted respect for Ali Azmat, who indeed is the only and the original singer of this song and no one else can actually match to Ali Azmat on this song. When Sayonee ended the crowd unanimously chanted for an encore, however, Ali Azmat first acknowledges the cheers of the crowd with a hat tip and thanked crowd.

After a 30 minutes break the band returned with refreshed energies and played out the second set displaying their peak performance. I am not kidding, Junoon actually played 23 songs! There were times when Ali Azmat took some well-deserved breathing gaps. He thanked the crowd and joked “kiya bachay ke jaan lo gai”. The concert ended as the trio came down on the edge of the ramp and played the National Anthem, the whole crowd with hand-on-heart sang with the band.

The most notable part of this Junoon’s come back concert was the accompanying band members for every instrument. From Ustad Ashiq Ali on tablas and Dholak to Ustad on the violin and Imaad on the keyboards.  However, the most important part was the addition of highly talented Omran Shafiq on electric rhythm guitar and Kashaan on acoustic rhythms filling in every space that could be possible.

This was actually the perfect opportunity for Salman Ahmed himself to play the leads with proper timing and dexterity, however, I felt otherwise. It was like Salman was back in old time as a three-piece band where he had to play the rhythm chords and then mashed the leads as well. I just couldn’t understand, why he didn’t allow the other members to fill in more parts. I bet, that could’ve given him all the space in the world his own good and he would able to show his acumen with the guitar. A real hit and missed opportunity.

I must say that it’s one of the best properly organized concert I’ve ever attended. I haven’t attended my previous Junoon’s concert I am sure this will remain in my heart for the rest of my life.

Pulwama Terror Attack: India’s ‘Error’ And Self-Imposed Terror!
Here’s How Pakistani Parents Can Nurture Their Children In The Best Possible Manner!
To Top