Coronavirus has changed the way of our lives altogether. The Sindh government had banned Friday congregational prayers earlier this month. Today, in Karachi, Orangi Town, Pir Abad, a lady police officer was thrashed by the people outside the mosque.

Reportedly, the lady police officer went there to immobilize the people in the mosque. She went there to prevent people from praying in congregation. However, as per the lady officer, the mob broke her glasses and encircled her. 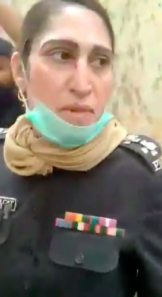 Furthermore, one of the participants of the mosque told the Station House Officer (SHO) in Pashto to go and sit in the car. In reply, the lady officer said, “I will lodge First Information Report against all of you”.

She further ordered her subordinates.” I want Imam of the particular mosque right now, bring him to the Police Station. Bring locks I am going to lock the mosque,” the Lady Station House Officer (SHO) added.

BREAKING: Lady SHO in Orangi Town, Peerabad attacked by mob – She tried to restrict people from conducting #Friday prayer in a mosque. Case against those who attacked police, will be registered & they will be arrested, said Police. #CoronaVirusUpdate #COVIDー19 #Karachi pic.twitter.com/Vk4On07xN3

The video of the Station House Officer (SHO) depicts the gloom reality of our society. Although Imam-e-Haramain urged Muslims against attending congregational prayers, yet people along with the Imam are not obeying the orders. Sadly, the government is trying hard but people in Pakistan are not understanding the severity of the COVID-19 virus. Currently, 68 people have died out of 4,688 confirmed cases of coronavirus in Pakistan. 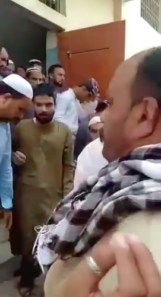 WHO recommendations about social distancing

As per the World Health Organisation (WHO), social distancing is the key to prevent this virus.

“Maintain at least 1 meter (3 feet) distance between yourself and anyone who is coughing or sneezing. Why? When someone coughs or sneezes they spray small liquid droplets from their nose or mouth which may contain the virus. If you are too close, you can breathe in the droplets, including the COVID-19 virus if the person coughing has the disease.”

The recommendations tell the virus spreads from social contact. In this scenario, congregational prayer is a folly. Muslims should pray at home to seek Allah’s mercy at such times. Irrationality and illogical steps are not supported by Islam.

This is how people reacted towards the viral video

What a brave officer. And what lowly cowards she is dealing with.

These attackers must not be left without punishment

Hopefully, her efforts will be acknowledged.

She is surely a brave officer and tried her level best disperse the mob. Authorities should take action against those who violated the lockdown. Her valiant efforts must be recognised by the higher ups of the police.

Salute to the lady.. and lanat for those who has attacked on her

The attack on the lady officer showcases the rogue mind of certain people in the country. Indeed, the lady has done a remarkable job to disperse the crowd. Moreover, the main culprit is the Imam of the mosque and not the people following him.