You might have come across the Justice For Julie hashtag somewhere on the internet while surfing as the trans activist is in jail. The trans activist Julie was picked up by the police 5 days ago by the Islamabad police. Since then, she has remained in Adiala Jail.

Julie Khan is a famous trans activist known well in the social circles of Islamabad. She has been categorized as a courageous, vocal, and devout activist who knows the struggle she puts herself into. However, it is easy to understand that Julie did not expect to be picked by the police and not be able to come out on bail from jail either and people are now demanding justice for julie. 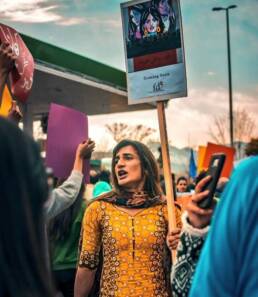 Islamabad Police state they have a case against Julie, but nobody knows what it is. On the other hand, fellow activists and other speakers suggest that she has been entrapped in a fabricated case. Julie was a very vocal person who spoke on numerous important issues. From woman rights, trans rights to missing persons, she extended her voice and struggle to everyone.

Julie was a prominent sight in Pakistan’s recent trend of Aurat March as well. Julie is being represented in the court by her lawyer and prominent social media figure Hassan Niazi. Niazi is also the nephew of Pakistan’s Prime Minister Imran Khan.

Previously, Niazi was actively involved in the recent ‘Bahria Town’ viral case. As per Hassan Niazi, Julie’s life is at risk inside Adiala Jail and the powers are trying to force their way on her. To understand, Julie was picked up 5 days ago. Since then, the 14th August holiday and weekend delayed procession.

Julie Khan still needs your support. Julie was granted bail, but for unknown reasons Judge didn’t sign the release orders & Julie’s release is now delayed to tomorrow. Also, Julie’s life is still under threat as opposition would stoop to any level to silence Julie.#FreeJulie

Julie was to be released on bail today, but the judge was to sign Julie’s release left the courtroom without signing it. Thus, Julie will be spending another night and jail. Lawyer Niazi is worried about the dangers she faces in prison. Social media has remained vocal on justice for Julie and continues to do so.

My heart is with Julie Khan, a prominent transgender activist in Pakistan detained on falsified charges in a male prison. We demand #JusticeForJulie and the release & protection of this fearless spirit, who’s been receiving death threats since ‘Naked Truth ft. Julie’ went viral. pic.twitter.com/8uqMiaplgM