The coronavirus (COVID-19) pandemic has distraught the world. Nothing remains of the world as we knew it. With emotions running high, incidents of aggression have become the norm.

One such recent incident in Karachi’s Jinnah Postgraduate Medical College (JPMC) has gone viral. After a patient passed away due to coronavirus (COVID-19), relatives of the family took the anger of the death out on the JPMC ward.

Over a dozen people barged into the JPMC ward and started vandalizing the established isolation center. The violence started after the JPMC administration refused to return the body of the deceased. As standard protocol, patients who die of COVID-19 are being dealt with proper SOPs. 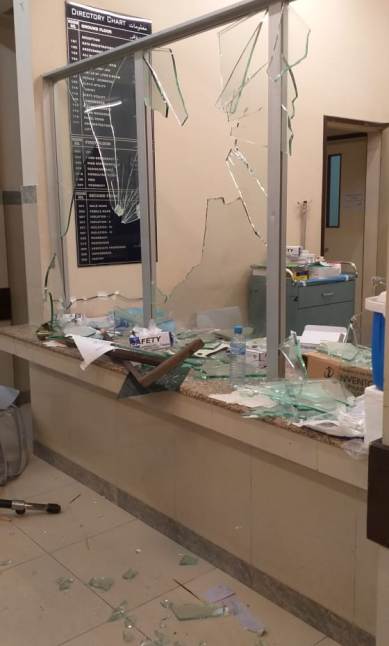 The hospital security could not cope with the mob’s intentions and decided to refrain from being involved. Instead, the Rangers had to be called into action. Once the family took the dead body outside of the hospital, it was the Rangers who arrived on time and forced the family to leave the body behind.

Rangers force the family of the patient out of hospital

While the attack was going on, 37 COVID-19 patients were present in the ward. Videos of the demolished ward are going viral. It can be clearly seen that from windows to pannels, from doors to the admin block, nothing was spared. The mob made sure they caused as much destruction as they could before the Rangers force arrived.

Once the Rangers arrived, they arrested 9 people from vandalizing the hospital ward. The 60-year-old patient was brought to JPMC from DOW Ojha Campus. Attendants of the patient accompanied him to the ward. But after receiving the news of his death, they lost all control.

“When a Covid-19 patient dies, the hospital administration calls the district health officer, who arranges the ghusl (bathing of a body) and burial with Edhi staff. They bury the body in a far-off graveyard,” said Dr. Jamali, the Executive Director of JPMC to a leading news outlet.

“I would suggest that we rethink this policy of not allowing the family to see the deceased. They are someone’s loved one. Give the family proper hazmat suits and let them wash the body and bury them.”

No FIR was filed against the family members by the hospital itself. Instead, Dr. Jamali believes that it is the State’s responsibility to do so. Dr. Jamali said she was afraid of retribution and an attack against herself in the future.