Comedian from the United States of America is currently in Pakistan and has been the talk of the town. From his comedy shows in Lahore and Islamabad to his trolling Pakistanis, McLellan is winning everyone’s hearts. What makes his trip wonderful is how the man has been showing the positive side of Pakistan, which many people in the West wouldn’t even believe in.

Before coming to Pakistan, McLellan surely did his homework and found out a lot about the country. For example, his joke on Lahore and donkey meat.

For lunch I stopped and got some authentic traditional Lahori biryani. pic.twitter.com/Bi1LUUwyGr

Proving How Well-Versed he is with the Humor, He even Trolled the Indians, Something which Pakistanis Love to do

In honor of Indian Independence Day, here I am training Pakistani spy pigeons to carry out top secret missions across the border. ?? pic.twitter.com/j9SNkFe9xp

Continuing to leave Pakistanis in laughing fits, McLellan just trolled Reham Khan, former wife of PTI’s chairman Imran Khan. McLellan was aware of the relationship between the former husband and wife and made a tweet.

To which McLellan Replied, “Tell Imran, I am Sorry“

Jeremy Continued Making Some Extremely Snarky Jokes Under this Post 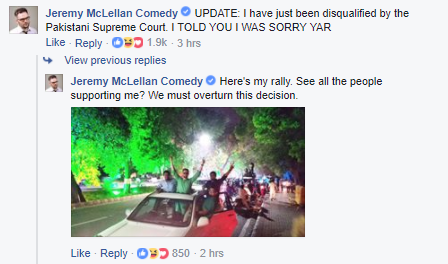 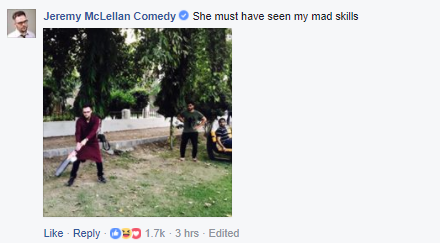 Pakistanis loved him for his comments and mtlab, nationality dede na ab inko!

Slaying in Shalwar Kameez…He is Already One of Us!

At the Wagah Border. Get hype. pic.twitter.com/295uIQvWR0

This guy is truly a winner when it comes to humor. He wonderfully grasped the culture of this country and made the best trolls about it. It’s like McLellan studied Pakistan and knew so much about this country already. The comedian has made excellent remarks about us and has enjoyed staying in our land.

While the rest of the world may label us as a terrorist country, this one man has shown to the world how Pakistanis are not what the world tells you.

These Two Pakistani Bloggers Just Won the Internet for Mocking Kendall Jenner’s Shoot!
This Is What Every Pakistani Girl Needs to Have the Perfect Hair for an Upcoming Wedding
To Top