Biryani With Aloo Or Without Aloo: Jeremy McLellan Created a Poll 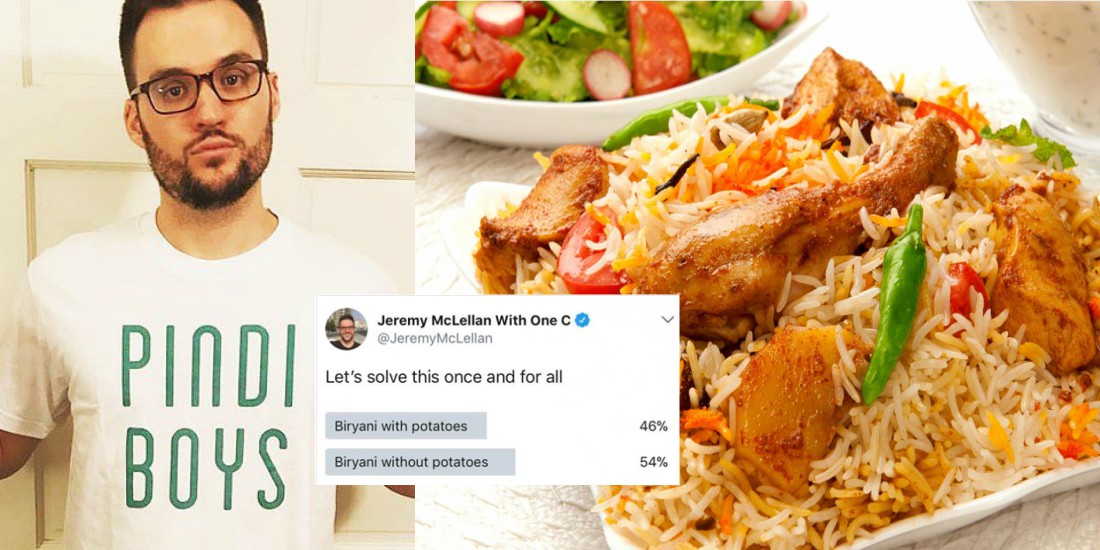 Out of all the South East Asian cuisines, ‘Biyani’ has always topped the charts of ruling planet earth with its delicious taste. From desi countries till making its place in the Gora land, it can make anyone fall in love with it. Starting from the aromatic smell, till the very bite of it. No one can ever say no to the most celebrated dish of the desi globe. Its love can make the foodies or non-foodies eat it every day and never be able to get over it. People were still not over the argument of Elaichi spoiling the taste of Biryani that has been circulating the social media. But now, aloo in Biryani has sparked a new debate that got on the nerves of many due to their perfect Biryani recipes. Well, this time the most loved Pindi boy, US-based comedian, Jeremy McLellan did it by creating a poll for having Biryani with aloo or without aloo.

Let’s solve this once and for all

After 24 hours and 14,334 votes, The Great Aloo War of 2017 has ended…in a tie. Nuclear war has been averted and a partition created to separate pro- and anti-aloo forces. Take heart, comrades. Our grandchildren will sing songs about this day. pic.twitter.com/iFn8TG7GrD

He came to the rescue for finding a solution over the numerous recipes of Biryani that has always been an issue at hand that various nations are struggling to solve. This poll showed that Jeremy, without any doubt, is totally in love with not only our motherland, but also the cuisines that come along with it as a blessing. His poll for sure would have made many people crave Biryani. However, as many were enjoying the arguments, Asad Umer also tweeted that he is not very happy with the results and considered it rigged just like every other election.

Dhandleee! We dont accept these rigged results. Biryani with aloo rules. Dharna to protest these results will be organized. A suitable location in cyber space for this dharna will be announced soon… https://t.co/9U2BBSlryf

It's not insane it's a battle we take very seriously . Jeremy didn't know what he has started I can't sleep until the final vote 😂

HERE COMES YET ANOTHER LAHORE VS KARACHI DEBATE

I'm sorry but how can you NOT love aloo? It's been there for you through some tough fried situations. pic.twitter.com/eOL6RAkGmU

It shocked the nation to see that it ended with a tie although everyone had a clear picture that their version of biryani would win this poll. But, hard luck as biryani proved itself of being a universal cuisine that makes people love every version of it. If you liked this article then like, share and comment down below to give us your feedback.