Propaganda is the wheel that drives the mainstream spectrum of certain news in the media. Islam and Muslims have been victims of propaganda that has been far spread for years, conditioning the minds of people to believe the unbarred falsehood.

For years, some part of western media has been advocating against the religious freedom of Muslims. People in the west have believed what they have been normally told through major media outlets. However, there is a large group of the western community that has now recognized this major loophole in the system of news. One of the best examples is Jeremy McLellan, a US-based comedian who recently visited Pakistan and has a fair share of love for our country. 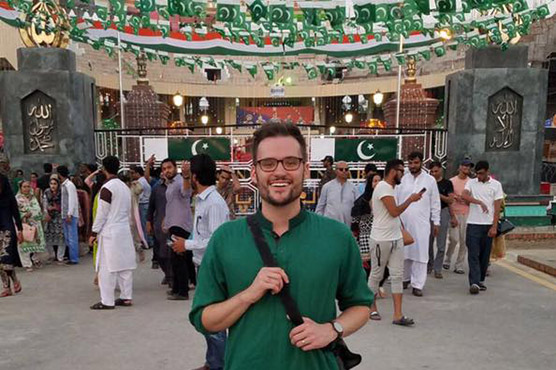 Meanwhile, a Canadian-Saudi Arabian human rights activist made the following tweet that has sparked massive controversy.

She blatantly targets the religious group here. Her ignorance can be well seen and she clearly needs some solid piece of information.

Left: a woman in a free country??

Right: a woman in a country ruled by Sharia law?? pic.twitter.com/QiJqX7FxPo

Here is our favourite gora, Jeremy McLellan, who has been knocking sense into people since 2017 or before

There’s a major revelation in his words for the ignorant mind.

1. Pakistan has female fighter pilots.
2. Burqas aren’t *that* common in Pakistan, and there are no laws enforcing hijab. I saw zero burqas when I was there. Mostly they’re in Swat or tribal areas.
3. “Sharia Law” means “Law Law.” It’s just Sharia. https://t.co/OGPpmRUFXO

We absolutely adore how Jeremy jumps in like a superhero and teaches ignorant people a good lesson. He dares to defend many aspects of our culture, religion, etc., with such a positive attitude.

Original tweet gets thousands of retweets of course. (Pakistanis feel free to correct me or expand on this.)

This is one of the reasons why he is loved by millions of Pakistan, besides his impeccable comedy!

Thanks for speaking against this propaganda and the truth for Pakistan, Jeremy!

Although this is not the first time he has played the good-guy on Twitter but the intensity of how it continues to amaze and inspire us, will probably never get old.

Somebody send Jeremy McLellan a full platter of chicken biryani all the way from Karachi for being an absolute legend!