Ever since Ayesha Gulalai leveled serious allegations of harassment on PTI Chairman Imran Khan, she’s surfaced on the mainstream level pretty often. Ayesha sparked a massive controversy with that alone and continued to do with more comments. Meanwhile, Jeremy McLellan, he is one brilliant comedian whose social media updates are dubbed in humor and we cannot handle it!

Moving on, the world celebrated Halloween on 31st of October; people came up with insanely creative ideas for it. Jeremy McLellan also had one idea that he shared with his fans and followers on social media. Here’s what he said:

I forgot to decorate my house for Halloween so I think I’ll just hang up my Pakistani flag to scare all the neighbors.

Since the Western society has a certain opinion about South Asia, especially Pakistan, he thought such a move would naturally spin their heads. Of course, his neighbors would be just another bunch of Americans believing all the propaganda about Pakistan, so, what on earth could scare them more?

Ayesha Gulalai didn’t like this joke and wants me to take it down. Sorry. pic.twitter.com/9ekJKEnNZ7

Social media went into a meltdown, shortly after…

I would send her a friend request but I hear that’s considered harassment now in Pakistan.

happy halloween to our neighbors 💀👹 pic.twitter.com/0r7vHkpJxK

Why not American flag ? It's not less scary. Pakistan never nuked any nation.

It would surely trigger India with this one!

It wasn’t all that Ayesha Gulalai said to him… He shared another update: 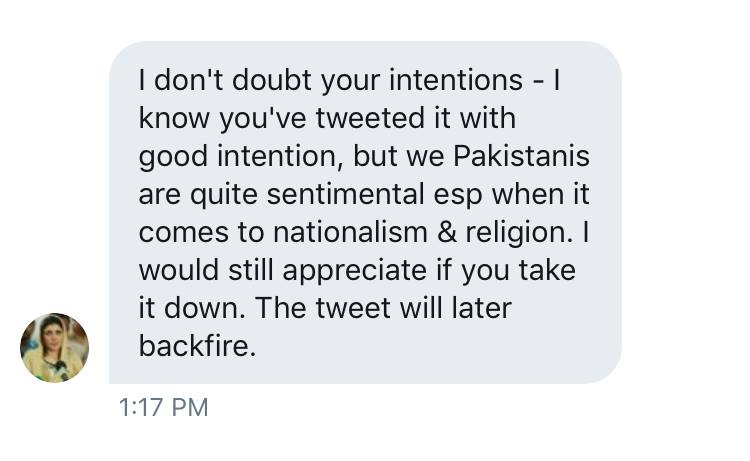 She tried to thoroughly explain to him of the repercussions but he hasn’t taken down.

Here’s more for your laughter dose! This guy, seriously.

Me: Maybe I need to take a break from Facebook to spend more time writing material for shows.[One week later]Me: Maybe…

It did come off as a surprise that of all the people, Ayesha Gulalai had a problem with Jeremy’s idea of celebrating Halloween. Do you guys agree with her?