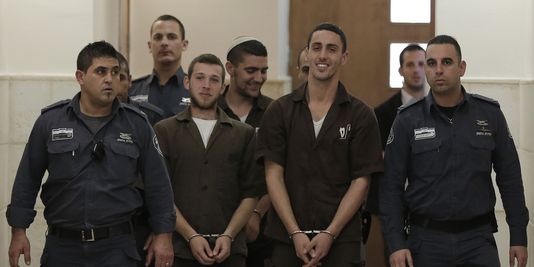 In November, a school in Jerusalem that taught both Arabic and Hebrew was set ablaze and destroyed by a group of extremists. The slogans of “Death to Arabs” were enchanted by the group. And other spiteful slogans such as “You can’t coexist with cancer,” and “Enough with assimilation” on the walls of the school, that has been the prime example of Israeli-Palestinian brotherhood.

As the couple of weeks passed after that incident, Israeli authorities began investigations and arrested 21 suspects belonging to the ‘Lehava’, an extremist outfit on charges of incitement to revulsion. Three young people, two teenagers, and a 20-year-old, have been arrested for performing an act of hatred. Israeli Defense Minister Moshe Yaalon passed the remarks against Lehava and government may black-list Lehava as a terrorist group after the incident.

“I have turned to legal elements in the defense establishment and in the Shin Bet with a request to examine the possibility of defining Lehava as an illegal association,” Yaalon said on Monday, after meeting with the heads of Israel’s internal top security agency. “I did this because we cannot as a country allow racist phenomenon to endanger in a substantial way the fabric of life here.”

Lehava is a Hebrew word that means “Prevention of Assimilation in the Holy Land.” It has similar meaning to Hebrew word for “flame.” The group came into limelight few months back when it tried to disrupt the wedding ceremony of a Jewish woman, who had accepted the Islam, with an Arab man in Jerusalem.

Related Article : The Future of Palestine-Israel Peace Has Become ‘More Uncertain Than Ever’

The group describes its ideology as that of Jewish extremist Rabbi Meir Kahane, a frantic figure of Israel’s extremist right in the decade of 1980’s who earned fame for his revulsion of Arabs. “I don’t want to kill Arabs, I just want them to live happily, elsewhere,” he once told cheering rallies, according to the media reports. “Give me the strength to take care of them once and for all.”

Kach Party, Kahane’s extremist organization, was banned by Israel in 1988 for spreading hatred, violence and racism. Kahane was murdered in his hotel room in Manhattan in 1990. The current leader of Lehava, Benzion Gopstein, 45-year-old, was once an important figure of Kach movement.

On the occasion of 24th death anniversary of Kahane, Gopstein made a speech and few of his comments were:

“Some 45 years ago, Rabbi Kahane said, shouted and cried out that the enemies within us are a cancer and that if we don’t take this cancer and get rid of it, we won’t continue to exist. Unfortunately, this dangerous cancer of coexistence has metastasized everywhere. There are various ministers in the government who are encouraging coexistence, who are giving them jobs, allowing them into the hi-tech world, allowing them to become doctors. Everyone knows today that Rabbi Kahane was right, but knowing is not enough. The rabbi wanted action and so we haven’t gathered here only to remember Rabbi Kahane; we are here to continue Rabbi Kahane’s way.”

The members of Lehava have emphasized primarily on terrorizing Jewish and Arab youths, especially Jewish girls, to stop them from meeting with Muslims. Its purpose to ensure the ‘purity’ of Jews has prompted them to spread the names and pictures of Arab men considered to have been enticing Jewish women. They harass the interracial couples in groups. One of the active members of Lehava claimed that the group had protected around 200 Israeli women from an evil eye of Arabs during the past four years.

Related Article :Russia Considers an Attack On Israel if US Does Not Stop Interfering in Russian Black Sea.

According to media reports, the government of Israeli Prime Minister Benjamin Netanyahu decided to take action against the group only after it felt pressure from the left leaning groups and liberals of Israeli society. There has been much confusion and dread spread across the cities of Israeli especially in Jerusalem that we witnessed cold-murders, abductions, robberies, and mobs.

Lehava’s tactics and, most importantly, an ideology pose a serious threat to social fabric within Israel. According to latest research by leading news agency, 21 percent of Israeli Jews consider themselves as “religious nationalists” – a significant part of who might be associated with Lehava’s extremist ideology.

Lehava’s rebellious leader Gopstein said that the actions against his group have a hidden political agenda behind it as the elections were arriving.”Instead of taking care of an enemy of Israel, the defense minister is trying to win over votes from the Left [by] taking on Lehava,” Gopstein said, according to the media reports and reiterated that the group should be awarded with Israel’s highest national accolade instead. “The group acts to save the daughters of Israel and deserves the Israel Prize.”