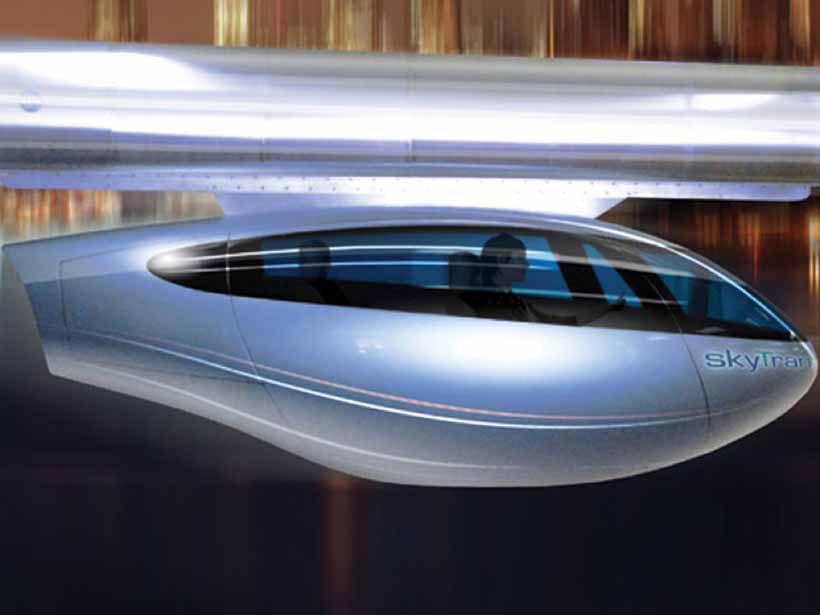 Israelâ€™s biggest defense contractor is getting into mass transit, building the worldâ€™s first aerial maglev to carry people in egg-like pods around its campus at 44 mph. If all goes according to plan, you may soon see it in Tel Aviv.

SkyTran is a personal rapid transit system that features two-person pods hanging from elevated maglev tracks. As futuristic as that sounds (and looks), the idea has been around since 1990. Itâ€™s been suggested in cities ranging from Tempe, Arizona to Kuala Lampur, but the idea never got off the, er, ground.

Until now. Israel Aerospace Industries is working with the California company to bring skyTran to its corporate campus in Tel Aviv. SkyTran told us construction will start in three months and be finished within a year. Itâ€™s a pilot program that could be expanded throughout the city, which has been looking at adopting skyTran for awhile now. SkyTran CEO Jerry Saunders says that the test track will be a 12-mile loop with a max speed of 70 kilometers per hour (44 mph). Saunders told Reuters that a broader system could hit 240 km/hr (150 mph) and carry as many as 12,000 people per track per hour.

A congested city like Tel Aviv is an ideal place for transit pods that float above crowded streets. The small pods and fixed route place the system somewhere between a car and light rail. The system is automated; passengers will summon a pod on their phone, have it meet them at a specific destination and carry them where they need to go. â€œIsraelis love technology and we donâ€™t foresee a problem of people not wanting to use the system. Israel is a perfect test site,â€ Sanders told Reuters.

The low-maintenance tracks move the cars with â€œpassiveâ€ magnetic levitation, so thereâ€™s no power required to keep the pods elevated and mobile. An initial burst of electricity sends each pod to 10 to 15 mph, and it carries onward to 44 mph while gliding inside the track with the attachment levitating one centimeter above the rails.

Saunders hopes to have the system running sometime next year.