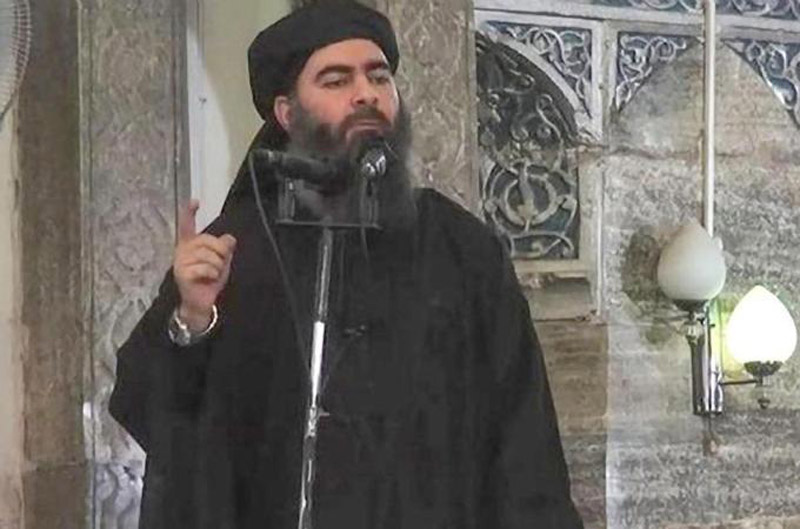 Iraqi state TV says ISIL leader was injured in a strike near Mosul, while US military cannot confirm.

Abu Bakr al-Baghdadi, the leader of the Islamic State in Iraq and Levant (ISIL), has been injured and a close aide was killed in a US-led airstrike, reports Iraqi state television.

There were no other details about the condition of the ISIL leader in Sunday’s report.

Earlier on Sunday, a message on a Twitter account attributed to the ISIL’s spokesperson Abu Mohammed al-Adnani wished Baghdadi a speedy recovery.

“Do you believe that the caliphate will end by the martyrdom of the Caliph? We reassure the nation that its emir Abu Bakr al-Baghdadi is fine, thanks be to Allah. Pray for his speedy recovery,” the tweet said.

Al Jazeera could not independently confirm the authenticity of the account.

A spokesman for US Central Command, which oversees American forces in the Middle East, could not confirm if Baghdadi was present at the time of Friday’s raid near the Iraqi city of Mosul, which he said had intentionally targeted the group’s leadership.

The strikes were a further sign of “the pressure we continue to place on the (ISIL) terrorist network,” spokesman Patrick Ryder said.

A Mosul morgue official said 50 bodies of ISIL fighters were brought to the facility after the air strike.

The air strike was one of two reports of attacks on ISIL commanders in Iraq.

On Saturday, US-led air strikes targeted another gathering of ISIL leaders near the al-Qaim border crossing between Iraq and Syria.

ISIL has been changing its strategy since the air strikes began, switching to lower profile vehicles to avoid being targeted, according to residents of towns the group holds.

The group has taken control of large expansions of land in Iraq and Syria, declaring what it calls a cross-border Islamic “caliphate”.

Shutting Guantanamo by 2016 ‘unrealistic hope’ – prison chief
Watch an American Singing the most Beautiful Song in Praise of Imran Khan!
To Top