Iran Raises The Red Flag Of War Implying Revenge Against The U.S!

The tension between Iran and America is witnessing a new height as Iran raised the ‘red flag of war’ over a mosque, hinting at revenge against the U.S. The U.S President Donald Trump ordered for the killing of General Qaseem Soleimani to decrease the rising conflict between the two nations. However, Iran raised the blood-red flag after the execution of the general.

U.S airstrike assassinated the head of Iran’s Elite Quds Force Qaseem Soleimani as well as deputy Commander Abu Mahdi al-Muhandis. The incident didn’t evidently sit well with Iran as powerful individuals belonging to the country were slain. This ended up escalating the tensions between the two nations, compelling Iran to take strict action.

Though, Trump mentioned he ordered the strike because of suspicious activity from Soleimani. The president feared the general was plotting attacks against the American officials, and could heighten the conflicts. Trump took the decision without consulting the Congress, and believed it to be necessary for the safety of Americans.

He briefed his decision to be towards lessening conflict, but it resulted in the execution of Iran’s second most powerful person.

How The Red Flag Is A Symbol For War 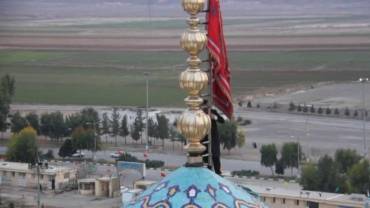 Whilst consoling the children, Rouhani emphasized that America wouldn’t be let lose nor forgiven for their act. He said, addressing Soleimani’s distressed daughter, “We will, we will avenge his blood, you don’t worry.” He then further added, ‘The Americans did not realize what a grave mistake they have made. They will suffer the consequences of such criminal measure not only today, but also throughout the years to come,”

‘This crime committed by the US will go down in history as one of their unforgettable crimes against the Iranian nation.” He further concluded.

The flag has been raised for the first time over the Sacred Jamkarān Mosque. It is clearly symbolizing the Iranians are out for blood, and opting for a full-fledged war against the US. More than a thousand protesters took to the streets. They chanted the words, “death to America” after the execution of the general. 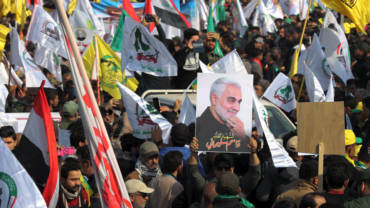 Anti-US protests are rampant in Iran at this point. Protestors burned and destroyed American flags while declaring war on the nation. The mourners had portraits of the slain men, gluing them everywhere they found fit.

Considering the tensions, the Foreign Office has handed out warnings regarding the travel to several Middle Eastern regions. The Foreign Office also emphasized that individuals outside of the Kurdistan Region should opt for leaving as the situation could accelerate for the worse at any minute.

The situation and relationship between the two countries seems to be exacerbating by the hour. If Iran is in preparation of launching an attack at America, it could undeniably initiate another terrible war.