Iqrar-ul-Hassan is a popular news anchor and journalist who has amassed a huge following in the past couple of years. People recognize him the best for his show “Sare-Aam” and also a popular face on talk shows. Iqrar is associated with ARY group for quite years now and has been one of the top journalists of recent times.

Iqrar got married to Qurat-ul-Ain Hassan several years ago and has a son from this marriage. He’s a really cute kid who often accompanies his dad on television shows. Meanwhile, recently, there were strong rumours relating to Iqrar-ul-Hassan’s second marriage with news anchor Fara Yousuf. People were largely speculating on social media and there was a debate. Many Pakistanis also chose not to believe any of these rumours. 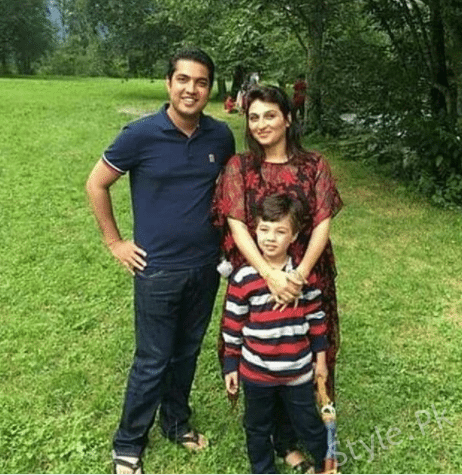 There have been pictures of Iqrar-ul-Hassan with his first wife Qurat and son Pehlaj. In those pictures, it can be clearly seen that Fara Yousuf accompanied the couple. Thereafter, his fans and followers, jumping to conclusions, started questioning as to what was happening here?

When asked if it’s his wife then why is she hiding in the pictures and not coming out openly, Iqrar managed to come up with a befitting response.

Hiding ?? You must be kidding. Here’s the answer. My both wives and my son 🙂 pic.twitter.com/ulSn0LYGjT

Now that’s a good reply, isn’t it? All confusion of his fans and followers are now clear. People can stop debating about it. Let the matter lay to rest and respect his privacy in it. Most importantly, nobody has the right to judge him or anyone involved because it is their personal life, personal choices and decisions which they are quite happy and content about.

We congratulate Iqrar ul Hassan and Fara Yousuf on their marriage. May the newlywed couple sustain a happy married life and cherish all blessings in their journey!