Iqra University has been a victim of trolls and jokes for as long as we can remember. Without any solid basing whatsoever, the university is disrespected every time someone starts talking about it.

Leaving everything aside, Iqra University in Karachi was buzzing last night for all the right reasons.

The university celebrated its 18th birthday and annual alumni meetup last night at Karachi Golf Club. Hundreds of current and alumni IU students joined VJ Ahmed Godil, Quratulain Baloch and Abida Parveen in the celebration of the university. What made this event even special is how VJ Ahmed Godil and QB along with hundreds of people present in the club, pulled one of the best mannequin challenges in Pakistan!

As usual, QB took over the crowd with her mesmerizing voice and songs. Before the crowd embraced the legendary singer Abida Parveen, QB and Ahmed Godil decided to give a shot on creating a world record by attempting the biggest mannequin challenge. 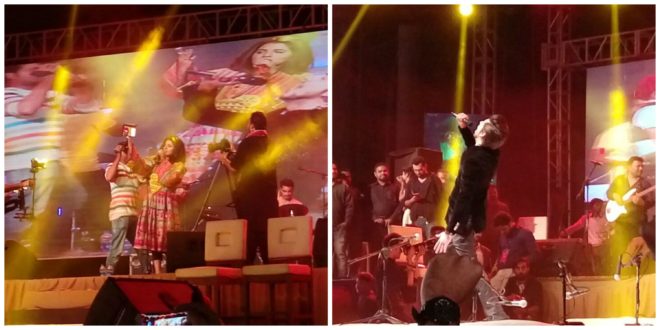 
Ahmed Godil frozen in a rockstar pose, QB in singing style and crowd froze to whatever they were doing in the most natural manner and it looked extremely impressive.

In addition to all the hype, Ali Zafar’s challenge was a must to add!


Similar to what IU’s concept, Ali Zafar’s mannequin challenge was also during his concert.

For those of you who do not know, the Mannequin challenge was started by Jacksonville students in Florida. The viral internet video trend recorded on the song by Rae Sremmurd known as Black Beatles is a trend where people remain frozen, similar to what mannequins look like. Instagram and Twitter were taken by storm by the #MannequinChallenge hashtag and people all around the world are now seen doing it.

Since the beginning of the trend in October 2016, a number of famous athletes, entertainers and teams have followed the trend. Pakistanis are not behind and a number of videos went viral where Pakistanis performed the challenge in a best manner.

Hoping that the Iqra university Mannequin challenge now qualifies for making a world record. What an amazing night it would’ve been. Kudos to the VJ Ahmed, QB and the massive crowd that took the chance in setting a world record. Good luck to the students!