Almost 1400 years ago, a number of important factors related to our health were sent to us in the shape of Hadith and Sunnah. With the passage of time, many of the Islamic commandments are scientifically proving to be beneficial for the masses.

One of the recent studies in the West proved how Namaz helps in reducing back pain. Earlier, scientists also proved the benefits associated with drinking water while sitting down, which is also a sunnah. In addition to all these findings, Miswak is now being sold as a ‘natural toothbrush’ in the Czech Republic. 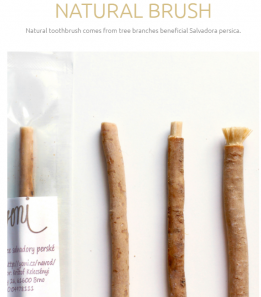 Selling it for 69 CZK, which is equal to 289 Pakistani Rupees, the non-Muslim audience is equally very surprised by the benefits of Miswak that were brought to their notice. The website illustrates numerous benefits of using Miswak, such as remineralizing the tooth enamel, preventing tooth decay and various others. On the other hand, Muslims were told the benefits of Miswak 1400 years ago as Prophet Muhammad (PBUH) declared it as a Sunnah.

Miswak In The Light Of Prophet Muhammad (SAWW)

According to Hazrat Muhammad (SAWW),  “When any one of you stand at night to offer Salah, you should clean your teeth with a Miswak because when you recite the Quran, an angel places his mouth on yours and anything coming out of your mouth enters the mouth of that angel.” [Shu’ab al-Iman, Vol. 2, Page 381, Hadith 2117].

(Sahih Muslim) A’ishah narrates that the Prophet (peace be upon him) said, “The siwak is a means of purifying the mouth and pleasing the Rabb.”

Abu Hurairah narrates that the Prophet (peace be upon him) said once on a Friday, “O Community of Muslims! Allah has made this day an ‘Eid for you, so take a bath and needfully brush your teeth with Miswak.”(Tabarani, Majma’uz-Zawaid).

“Make it a habit of performing Miswak, as it is a means of cleansing the mouth and a means of attaining the pleasure of Allah.” [Musnad Ahmad, Vol. 2, Page 438, Hadith 5869]

In 1986 and in 2000, The World Health Organization (WHO) also recommended the use of Miswak for oral hygiene.

The using of Miswak is probably the easiest Sunnah, but also a forgotten one. From using it before going to bed to using it before reciting the Quran, the benefits of this Sunnah are not limited to getting Sawab only – it as numerous health benefits which are highlighted in YONI’s video as well.

It is amazing how the West is now understanding everything Islam stated hundred years ago, while Muslims themselves do not pay much attention to it.

Pakistani-English Girl’s Body was Found in a Freezer after being Killed Due to Alleged Honor Killing
Daraz.pk’s School Essentials Have You Sorted for School This Time!
To Top