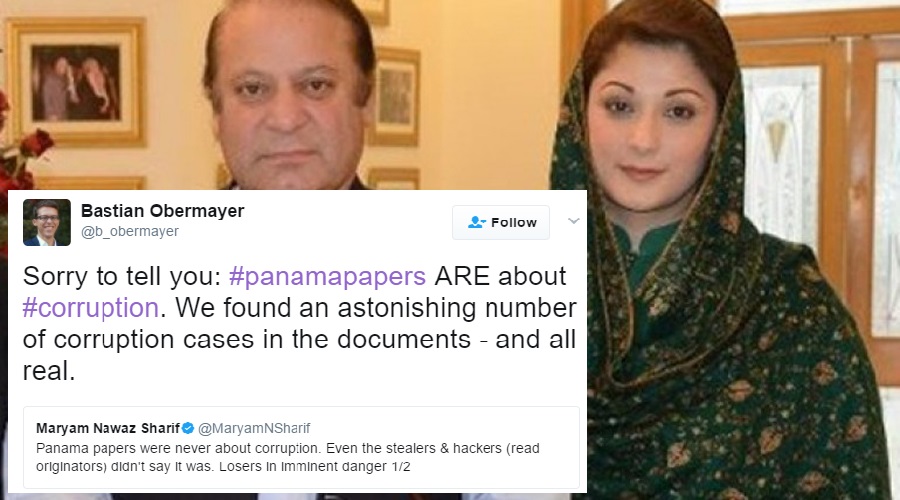 Since the announcement of Panama results, Maryam Nawaz continues to declare how the family is innocent of all accusations and that they were framed by the oppositions and journalists. While the daughter of the Prime Minister of Pakistan tried to cleanse the image of the accused by making a few tweets, she claimed that Panama Papers were “crap” and a way of bringing her father down.

Panama is crap. Trashed in the rest of the world. Those relying on it to bring down NS wil bite the dust Insha’Allah https://t.co/j17LCdlfvV

She continued her justification by stating how the Panama case was never about corruption.

Panama papers were never about corruption. Even the stealers & hackers (read originators) didn’t say it was. Losers in imminent danger 1/2

Then she made an attack on Imran Khan and his government in PTI. Given how Imran Khan was the one who was responsible for bringing Panama case to action, here’s what Maryam Nawaz said:

You won’t be able to present Panama papers as a substitute or compensation for yr dismal performance in KP. Electorate has matured,u haven’t

To answer what Maryam was condoning, Pulitzer-winning journalist Bastian Obermayer made a tweet to Maryam Nawaz in order to make her “confusion” clear”

Sorry to tell you: #panamapapers ARE about #corruption. We found an astonishing number of corruption cases in the documents – and all real. https://t.co/iC6zpoG4DU

Obermayer from Süddeutsche Zeitung was the first publication to receive the Panama Papers and the publication is responsible for issuing the story.

He continued addressing PM’s daughter by telling her that journalism is not responsible for bringing the government down.

The misery of journalists who broke the Panama story is understandable. Their overt & covert efforts to bring the govt down came to a naught

Journalism isn’t about bringing down a govrnmt. It’s about telling the truth. Like it or not. (& #panamapapers isn’t only abt Pakistan, btw) https://t.co/u6XzgZjjce

She then made this following tweet to hint that the journalist has ties with PTI and Imran Khan:

Don’t want 2say much abt nexus bet u & yr Pak counterparts but sad that they bcame a part of conspiracy against Pak. https://t.co/HQANc2lvWT

Joining the conversation in order to prove how wrong Maryam Nawaz is, Pulitzer-winning journalist and co-author of the Panama Papers Frederik Obermaier reminded her of the real notion:

Dear @MaryamNSharif, do you want to claim this is not your passport #PanamaPapers? https://t.co/gAVGW52zuk

The journalist brought her passport and the email conversations exchanged, declaring how she owns offshore companies and flats.

Obermaier went ahead by telling Maryam Nawaz how Panama cases are nowhere close to being trashed as the investigations are still on-going.

The conversations stopped as soon as Maryam Nawaz put an end to replying to the journalists. However, the way these two international journalists proved their stance proves that they have done their homework.