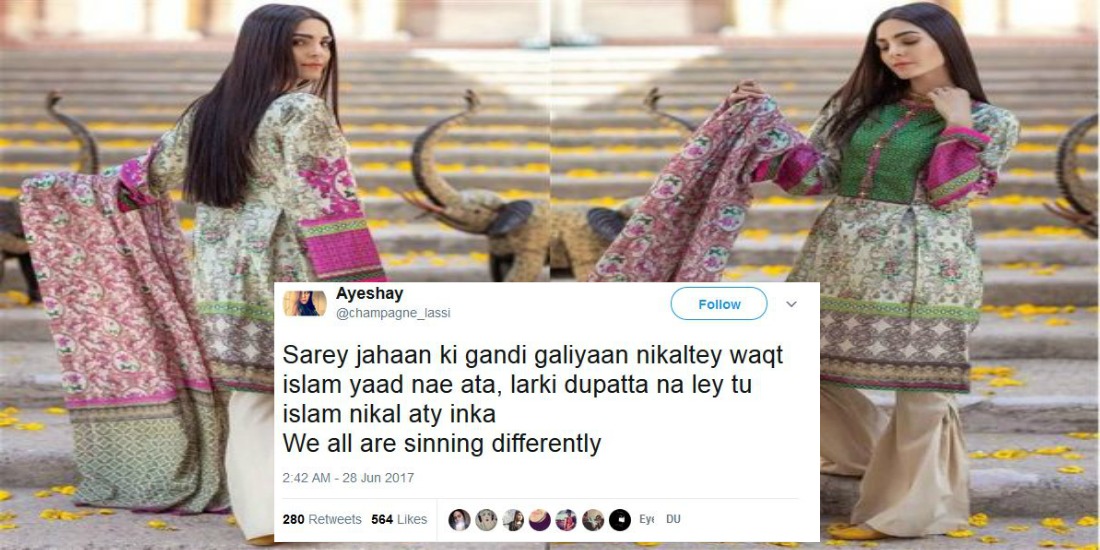 Soon after you read the title, I am sure you’d question the need of having an article around this particular notion. Yes, you might not consider it important to cover such an aspect, but given the incidents and the verdicts Pakistanis expressed in the course of two days, one needs to shed light on this matter.

When it comes to religious subjects, there are always ifs and buts – there are always two sides of the coin. Given how extremist we are becoming, there is no such thing as ‘bowing’ down to another person’s perspective left. Call it ego or not, but it is what it is.

Eid, an auspicious event where Pakistanis were sharing their joy and images on social media took the ugliest turn of events when local mullahs and keyboard jihadists (literally) tried to spread Islam by, as always, commenting on women only. Before we proceed, here are the two Quranic verses you need to keep in mind:

It all started when this guy, in his high spirits of Eid, made this tweet:

In giving a befitting response, here’s what happened:

Here, I fixed it for you. You are no longer a beghairat. pic.twitter.com/RVp0jEk0J9

When it comes to narrating the Quran in situations from our day to day routine, the pattern has become so obvious. Most of the subject of conversation on Twitter or on any other space for that matter revolves around one particular topic: women. “What should women do? What should women wear? Is it right for women to step outside their homes? Why do women need feminism? Why do women breath? How should women really breath? What happens if a woman breathes too loudly?”

With these two tweets, Pakistanis expressed their opinions and some of the responses couldn’t have made more sense, given the situation!

It isn’t about how well you are covered or not – it is about mentality. God made us humans, not animals who lose themselves. Maybe differentiate a little?

The hijab is not to be blamed because the flaw is the mentality.

Notice how this entire time, most of the people made it their business to comment, as if it is a compulsion to act on this.

By this dupatta thing

On a Lighter (and much needed) Note, Some Pakistanis Made Memes Out the Debate

when you're lowering the gaze and staring girls to ask them to wear a dopatta as well pic.twitter.com/4ggYGv3wH4

If Aunty Gormint can wear Dupatta, what's your excuse? pic.twitter.com/8F1b24N2HY

even madhuri can wear dupatta why don't you? pic.twitter.com/MwRowwUKRI

We do what pleases us. People open the Holy book just for the sake of giving rebuttals on subjects that are not any of their concern. The “burai ko dekho aur ruko usay” doesn’t lie in the dupatta of a woman, but lies in the man who thinks it is okay to rape an unknown woman. Haven’t you heard, there are women in this world who walk with the label of “raped” even when they were covered head to toe? Is the manhood so easily provoked that the absence of a dupatta around her channeled his inner ‘animal’? Stop finding excuses for the cruelty that is happening around you.

Mahira Khan’s Reply to Hamza Ali Abbasi’s Tweet is Something Every Pakistani Needs to See
An Indian Film Copied The Pakistani Song “Hawa Hawa” And Pakistanis Were Not Even Surprised!
To Top