Instagram is sending Notifications when you take Screenshots and People are freaking out! 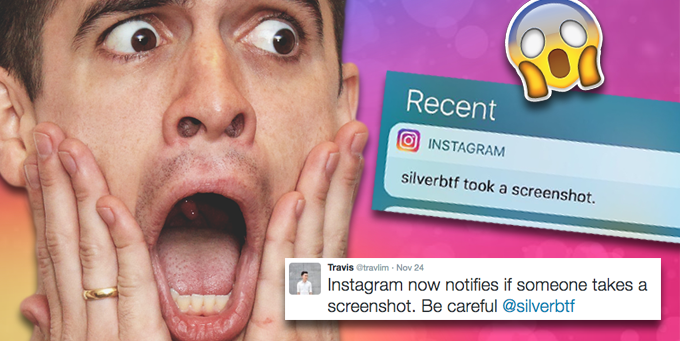 A tweet has been going viral claiming that if a user takes screenshots of someone’s picture on Instagram, the app sends a notification to the person whose screenshot has been taken. A news that is sure going to freak out many shady users.

With thousands of retweets, this tweet sure has freaked out many. It makes many perceive that when they will take a screenshot of a user’s photo to save or share, Instagram will send a notification to the sender.

But don’t you lose your sleep yet. There is more to it. The said tweet misses out an important detail. It’s true that Instagram is sending notifications of screenshots but that’s limited to the story feature.

Through the new self-destructing or ‘Vanishing Feature’ as Instagram calls it, a user can send pictures or clips to other users (groups or individuals privately) which would automatically be deleted along with the message from the receiver’s device once they have viewed it. But if the receiver acts smart and takes a screenshot of the story they received, the sender gets a notification about it.

Going further ephemeral, Instagram has also launched the new feature of live videos where users can stream videos to their followers and once they are done with that, the video disappears from Instagram. Just being original.

Got it? Now don’t break trusts and think twice before taking screenshots on Instagram. Or it may end up the last time they trust you…