Instagram has finally launched a dark mode feature and social media enthusiastic are absolutely freaking out! The concept of dark mode for social media apps has been famous for a while now. This is because people enjoy using such apps at all times of the day. But when you’re in bed continuously staring at a screen for hours at night time, then your eyes can get damaged. This mode doesn’t only provide a calmer look to the app but also rests the eyes and protects from ‘too much light’

A lot of prominent apps like Twitter and Messenger have dark modes which is why people use them on the daily. While, it can be difficult to do the same for Instagram because the constant white background of the app gives people a headache. People installed various different apps that helped them use a dark mode in Instagram. Such apps are available on both Android and iOS but why download a separate app just to use the dark mode?

Therefore, Instagram has now decided to incorporate the dark mode in its latest beta version of the app. It is important that if Instagram wants to retain its position as a strong competitor within the market then it would need to adopt different features. Dark mode has been relatively popular among people that enjoy social media. So, being a social media app, Instagram is on the right track by introducing this important feature. 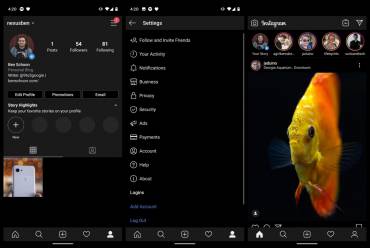 Instagram’s dark mode is a mixture of black and gray, so it isn’t exactly purely dark like the other dark modes. However, the content of the app isn’t affected at all. The pictures, videos, layout, and styling remains the same. Though, this feature doesn’t save any battery but it just lessens the continuous strain on one’s eyes.

How To Get The Dark Mode:

Firstly, to activate the dark mode, you need to install the newest beta version of Instagram. Moreover, you should also have the latest version of Android and iOS. The devices that it can work on for android include latest version of Samsung’s One UI, Stock Android 10, and Xiaomi’s MIUI 10. You will need to go to the settings of your phone to turn the mode on. It is a simple process but getting the necessary equipment for it is difficult. Not to mention, people are also hoping that other popular apps also take the initiative and launch the dark mode already. At this point, this feature is becoming a necessity considering how this generation tends to enjoy using their phone in the dark.

What do you think of the situation? Will this dark mode be helpful for people? Do you think that you might be using the dark mode for Instagram if you have the latest version of Android or iOS? Share your thoughts using the links below.