Insha Afsar, The One Leg girl Who Is Going To Represent Pakistan

According to history, nations who don’t have heroes fail to rise and those that stop producing them vanquish or fade away. Every nation, culture, has heroes because they are the ones who have the ability to act wisely in the times of adversity, who serve as a beacon for future generations, who can lead and set examples. Luckily, Pakistan has been blessed with such assets since 1947. Meet Insha Afsar, the girl representing Pakistan in the 2018 Paralympics.

In 2005, when the northern areas of Pakistan were struck with an earthquake, Insha lost her left leg up to the hip. She came to the USA after six months of the earthquake for her prosthesis. After TIMES magazine photographed her, she caught the attention of one of its editors, who offered his space to her and also sent her to school. 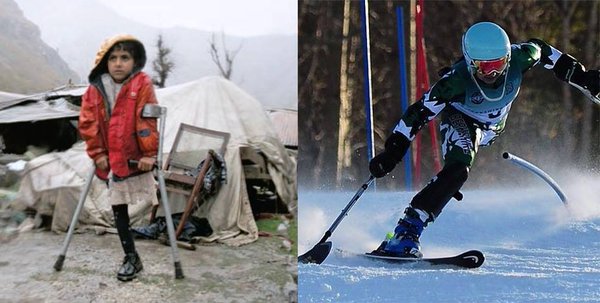 Her friends suggested she join them in skiing, and she accepted this challenge! Today, Insha is one of the best skiers in Pakistan and is going to represent her country in the upcoming Paralympics 2018 in South Korea. Insha Afsar competed with more than 40 athletes in US Paralympic Alpine National Championship in 2015.

For Insha’s family, however, it was not easy to digest the fact that their daughter was going to become a sportswoman. During an interview, she expressed her views about it:

“I come from a place where it’s not common for a woman to be an athlete. Coming to the US and then pursuing a sport that I love, that might inspire people to come forward and do what they want to do, despite what’s holding them back”

Unfortunately, Pakistani society doesn’t pay much heed to our sportswomen, who challenge its stereotypical norms and values. “Larki Ka Asal Ghar Uska Susral He Hota Hai” is the most typical remark of our society when a girl wishes to do something extraordinary. Instead of supporting her stance, everybody comes to create hurdles. However, Insha has leaped over these hurdles!

Insha once said, “I am a person that likes going fast, doing everything fast, I just like speed”

Insha Afsar is not just an inspiration for the disabled girls, this 16-year-old is also a role model for others who are looking for some kind of motivation. She hopes that her passion for the sport may encourage others, and she is waiting to see the day Pakistan has many female representatives in different sports.

The Majesty Of Sindh – Patari Tabeer’s Fifth Episode Released
RJ Khalid Malik Bidding Farewell To His Radio Career Is Probably The Saddest News You Will Hear Today!
To Top