Social media and other media platforms have made it easy for different people from around the world to interact with each other. In the recent past, many cases of foreign women traveling to Pakistan to get along with their online lovers have been reported. Since the start of the China-Pakistan Economic Corridor (CPEC), a lot of stories regarding Chinese men marrying Pakistani Christian girls surfaced the media which later turned out to be a huge scam.

An Indonesian lady was cheated by her Pakistani lover!

Last month, an Indonesian woman reportedly came to Pakistan to marry his online partner. The case hails from Pakistan’s Punjab side, where a guy from Bahawalpur called his middle-aged Indonesian lover to Pakistan. As said, the Pakistani national promised her a ‘bright future’ together and later deceived her.

Started on Facebook, Murnianingsih Nanang Syarif, from Indonesia, aged 37 visited Pakistan last month and got married to a Pakistani man earlier this week. At first, the woman befriended the Pakistani man and after days of regular chatting, she fell in love with him. After her arrival in Pakistan, the guy never took her to-be wife to his native area and even tied knots in the provincial capital without anyone present from his family. Just in a few days, the guy left his Indonesian wife without any money on her on grounds of ‘over expense and unaffordability’.

Here’s an image of the Indonesian national’s passport! 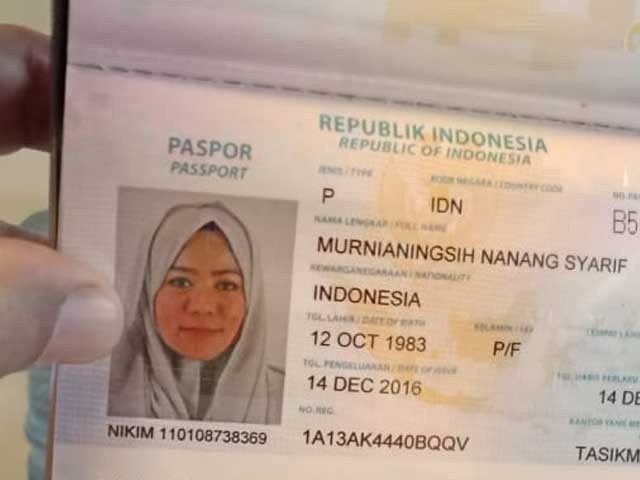 Lured on a known social site, Syarif was left stranded at Lahore airport by his husband who made her believe that he’s gonna come back but never returned. The Indonesian national waited at the airport for 3 full days for her Pakistani man. According to the airport management, Syarif was continuously crying and anxiously waiting for her husband to return.

Betrayed and severely hurt, Syarif then shared her condition with her family back in Indonesia. She then asked them to wire some money for the ticket as her so-called husband had taken everything from her beforehand. The Indonesian national than went back to her native country as soon as the money was transferred.

It is believed that the guy only had intentions of looting her. No investigation or case was filed against the Bahawalpur guy as the victim didn’t do so. This is not the only case of a foreigner being betrayed by her online lover. A huge number of such stories are reported on the local media on a regular basis. The higher authorities should look into the issue as the percentage of such cases are on a rise.

Found this story relevant? The comment section is just below!

Shahbaz Sharif’s Car Hit A Disabled PMLN Worker Outside Kot Lakhpat Jail And This Is Not The First Time!
Gray Rhino – An Economic Stampede That Demands Pakistan’s Attention!
To Top