Another day, another time as we tell you how Indians went nuts on social media. This time it is against their very own Zaira Wasim who starred in a mega-hit Bollywood film, Dangal.

Almost a month ago, Zaira Wasim faced a huge round of trolling when she met Chief Minister of Jammu & Kashmir. It was when Indians went nuts for the first time over why she met the CM.

Although Zaira publicly apologized for the entire action she took (even though she did not commit a crime or did something ethically wrong), Indians obviously didn’t spare her. Yet, for the sake of the people of India, she resorted to apologizing them. Where she found immense criticism for her meeting with the Chief Minister by local Indians, many renowned celebrities rose to support her. 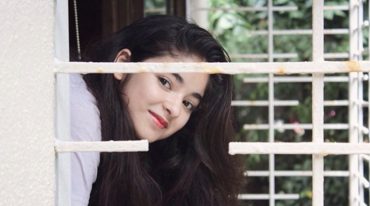 Zaira Wasim was surrounded by a bevy of social activists and Bollywood celebrities who rescued her, making sure that they do not see it as “anti-India” act from her part.

But hell broke lose once again and this time it is pretty confusing.

Zaira’s mother, Zarqa Wasim once posted a photo on social media that looks like a pro-Pakistani one. She clearly looks to be a supporter of Pakistan which is enough to cause a massive upheaval from our noisy neighbors. 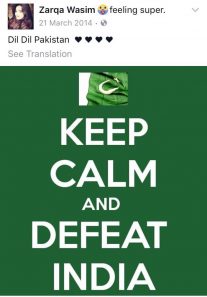 Here’s another one: this time, looks like she was hyped for a Pakistan-India cricket match and we know who she was supporting 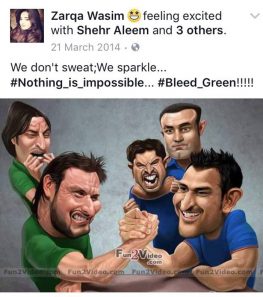 And now the real thing…

People lost their minds and wreaked a havoc on social media after someone dugged up the photo posted by Zarqa Wasim.

Kick Zaira Wasim Out Because a Nobody, Amit Chahal from nobody-knows-what-Indian-town says so

zarqa wasim u people deserve to be kicked out oh India …. #BringBackSonamMahajan

@Zarqawasim KEEP KALM AND GET LOST OF MY NATION. 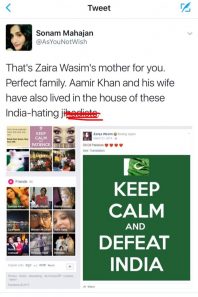 That picture was posted about 3 years ago perhaps and was not deleted. Maybe her mother did not know that Zaira would rise to imminent fame. Shame that Indians are spreading so much hate. They forced Zarqa Wasim to delete her Facebook account.

So guys, watch out for social media police and stalkers. God knows what they might do if you became famous and they found something to bark about.

Finally Momina Mustehsan Finally Speaks Up On Her Engagement!
These Are The Valentine’s Day Special Deals You Can Avail Even If You Are Single!
To Top