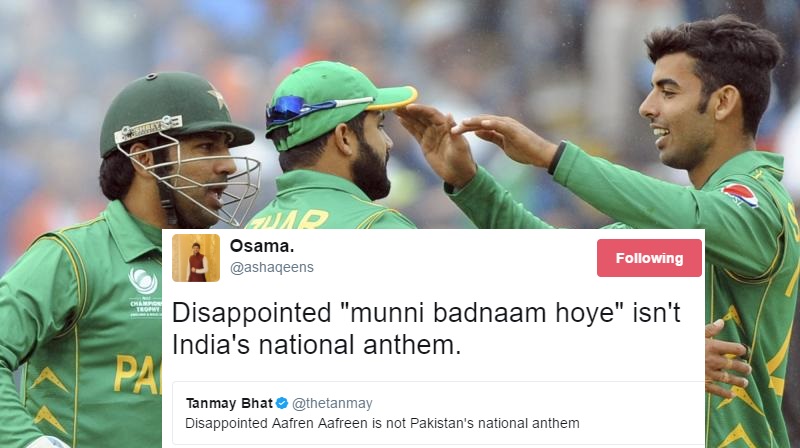 When it comes to a match between India and Pakistan, nothing is as simple as it looks. Aside from the fact that everyone is fired up, the rivalry between the citizens is beyond words. Everyone is throwing shade at each other. While the Indians come up with nasty jokes related to electricity and gurbaat, Pakistanis just use the word ‘toilet’ and the entire Indian space melts down.

But people knew it would be painful to watch our team go against one of the best teams (let’s just face it) in the world!

Too emotionally unstable to sit through another Pakistan-India match that will leave everyone distraught.

While Pakistani men went face to face against India last night, our brothers and sisters were taking the social media by storm to make sure they conquer at least somewhere.

Pakistanis Knew Exactly How To Give Him A Befitting Response Right There And Then!

Thanks for not copying that song in one of your flop movies, mate. https://t.co/49z4ZydQ7B

This is coming from a guy who belongs to a country where people go to sleep listening to Himesh’s Shaka Laka Boom Boom https://t.co/4IeGa8WroX

Wasn’t it written by Javed Akhtar? Guy couldn’t even find anyone in India to sing it lol? https://t.co/PQLV1pBen5

While Pakistan may have lost the match in an awful way, safe to say, our social media warriors certainly know how to win it with their humor and witty comebacks!

Shah Rukh Khan ‘Fumes’ Over This Prank Which Literally Looks Staged!
17 Types Of Sadqa Each And Every Muslim Man And Woman Should Practice In Ramadan!
To Top