The Indian Supreme Court settled a decision on Saturday that a Hindu temple can be constructed at the disputed Babri Mosque land. All the while, Muslims will be provided a separate land for building a mosque.

The decision seems to be a great win for the Hindu nationalists who are passionate supporters of Prime Minister Modi. The site in Ayodhya in the northern part of India needs to be handed over to the Hindus without any questions. The court ruling mentions that the Indian government is looking into developing a board of trustees to initiate the construction of the temple. 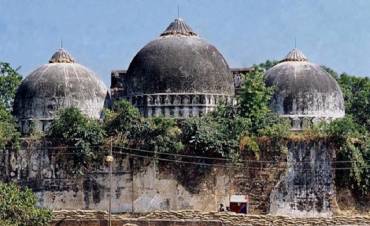 It ruled that there is profound evidence suggesting that Lord Ram had been worshiped even before the British colonized the subcontinent. And that the first Mughal Emperor Babur built a mosque on top of the temple at the current site. Apparently, the court came to the conclusion that the mosque wasn’t built on vacant land. It mentioned, “Arguments were made on archaeology report. Archaeological Survey of India’s credentials are beyond doubt and its findings can’t be neglected,”

This judgment also focused on ending years of battle over the disputed area. And even the Hindu organizations, as well as other political leaders, have mentioned maintaining peace. In relation to this, Modi had tweeted, “Whatever is the verdict by the Supreme Court, it won’t be anybody’s win or loss,” to further add, “My appeal to the people of India is that our priority is to ensure the verdict strengthens the values of peace, equality and goodwill of our country.” Yet, it is for sure that this decision will divide more than keep the peace.

The Years Of Dispute Associated With Babri Mosque:

The location had caused endless bloodshed which goes back to the 80’s where Hindu nationalism was on the rise. And they enforced the deconstruction of the mosque to build a Hindu temple. Then in 1992, a mob of Hindu nationalists and activists decided to demolish the mosque, ensuring that the mosque became one with the ground. Afterward, throughout the years of conflict, the court ruled to settle the dispute. Yet no decision was able to satisfy both parties. Now, the dispute has come to a conclusion but the Hindu’s got the bigger end of the stick.

This has caused Muslims in India to fear the direction of the country. Considering the sudden decision for Kashmir which has gone heavily against the rights of Muslims, the situation seems to be frightening for the Muslims. The country appears to be leaning more towards the betterment of Hindus. This can result in a power imbalance between Hindus and the minorities. Though, Modi clarified that heavy disputes should be avoided. So even BJP and other RSS organizations ensured to remain subtle about the decision.

What do you think of the situation? What does this decision of handing over the Babri Mosque to the Hindus say for the Muslims living in India? Is it doing them justice? Share your thoughts using the links below.