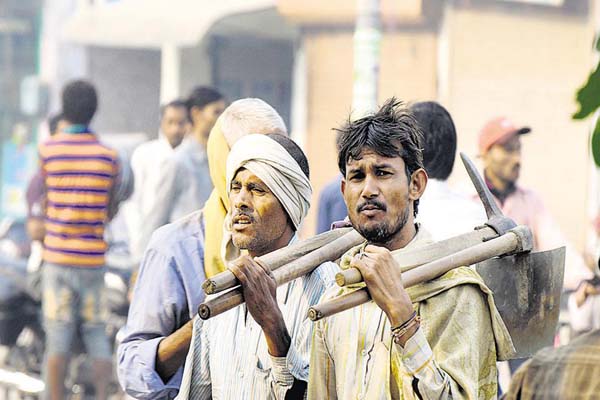 Several poor laborers were hired by an agent of the Indian intelligence agency Research and Analysis Wing (RAW) in the guise of a ‘contractor’ for staging an anti-Pakistan demonstration outside the UN office at Sonawar in Srinagar on Tuesday. According to KMS, the Indian agency’s plan was exposed as the laborers themselves spilled the beans before media at Press Colony in Srinagar.

According to KMS, the Indian agency’s plan was exposed as the laborers themselves spilled the beans before media at Press Colony in Srinagar.

The facts came to fore after the hired laborers had an argument with the ‘contractor’ at Press Colony over money distribution. The hired laborers said that they were waiting for roadside at Pattan in Baramulla district to be hired for some labor work. “It is our routine to wait for someone to hire us for some labor work. We earn our livelihood by doing some manual work,” they said.

“This man (contractor) said he needed some 10 laborers. He provided us a vehicle and promised to pay Rs 400 each,” one of the laborers said. He added that the vehicle was driven directly to the UN office at Sonwar in Srinagar where they were asked to stage a protest against Pakistan. “He asked us to chant some slogans. He took the lead and we followed him,” another laborer said.

‘However, the laborers said, no media person was present at Sonawar to cover the protest so the ‘contractor’ later drove them to Press Enclave for media coverage of the ‘protest’.

‘However, before they could protest again, they asked the ‘contractor’ to pay them. After brief arguments, the media men asked the reasons for the exchange of words. As they began to tell media about the facts, the ‘contractor’ ran away from the scene. The hired laborers took possession of the vehicle.

“We will not allow this vehicle to move till the ‘contractor’ clears our payments,” the laborers said. After some time police appeared at the scene and the ‘contractor’ re- surfaced. However, he refused to reveal his identity before the media. The laborers told media that they had no idea of anti-Pakistan protest.