The occupied Jammu and Kashmir are the world’s heaviest militarized zones. There are more than 600, 000 Indian soldiers deployed in the valley as there is a soldier for every 10 Kashmiris. Still, the freedom movement is going strong. Kashmir youth, men and women break curfew every other day. Holding handmade placards and flags chanting slogans, carrying Shuhada’s coffins. These people don’t know fear anymore. They are not afraid to die and so they have become a source of fear for the Indian Army. 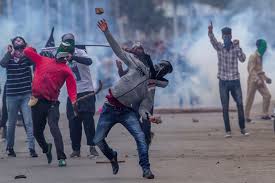 Recently a 33-year-old CRPF officer committed suicide in the Indian occupied Kashmir. There are some reports that he killed himself because of the deplorable living conditions but the army officials denied any foul play. They are saying he committed suicide due to marital issues.

Central Reserve Police Force(CRPF): There are some reports in social media attributing the incident due to bad living conditions which is untrue. https://t.co/cA6PRujNll

According to sources, the 33-year-old CRPF officer joined the army in 2014, He was from Coimbatore in Tamil Nadu. The deceased soldier joined his battalion on the 14th of august after leave, while his wife joined him in the 20th after 4 days, he was found dead in his house. He killed himself with his service weapon. The remains will be sent to his hometown.

The rising ratio of suicide in Indian Army and Police:

440 Indian paramilitary police and army officers have committed suicide since January 2007. The poor living conditions, constant violence, and fear of life are measure triggers for the depression and anxiety in the officers and jawans. And this leads to heinous crimes against humanity, atrocities, and violence. And also, sometimes it can trigger a person so much that they resort to taking their precious lives.

Indian Army Has A Real Issue To Deal With And It’s Not Related To Pakistan But Suicide!

The difference between Pakistani and Indian Army is that the Pakistani soldiers are in the army with a mission. Being a Muslim, our belief is if we die protecting our country and other humans we get the eternal life. The strong faith in Allah keeps our brave jawans smiling at the face of death.

In a shocking incident, a CRPF #jawan allegedly committed suicide by firing at his head using his own service rifle inside #Jujumara #CRPF camp on Tuesday afternoon. https://t.co/0eWLKx0UzX#odishanews | #ommcomnews

But with Indians, they just know this life. Though they have stolen the word Shaheed from us, they really can’t grasp the concept behind it. And so, we see news of army men committing suicide and complaining about the living conditions.

Another important difference is they know they are with the wrong side, and the human conscience can not justify killings, rapes, and torture. This adds to mental health issues.

India is merely using the Army men as pawns:

The living conditions of the Indian Army is beyond bad. The Army jawans are forced to live in deplorable conditions, without enough food. It looks like corruption is eating away our neighbors too. Due to Indian’s aggressive and violent policies, Indian border with Pakistan especially the LOC is one of the most happening. The jawans sometimes have to stand for the whole period of duty hours and the poor souls are fed only paratha and chai for breakfast. Daal roti is their regular lunch and as the title says, they have to sleep on an empty stomach mostly.

This goes to show that mother India is not insensitive to the people of the Atoot Aang Kashmir but it treats the rest of its citizens with the same mindset. That’s some equality.

What are your thoughts about it? We hope the Indian government starts investing its energies in making the living conditions better for its citizens. And not into making them submit to their will.