Plane crashes are one of the most horrific accidents that cause hundreds of people injured and killed. Another air crash incident shook the world as Indian airline, Air India plane crashed in the city of Calicut after skidding off the runway and falling into a 35 km slope, which broke it into two, Pakistanis are sending their condolences.

Reports suggest that about 18 passengers including the pilots have lost their lives in this tragic incident with over 140 people including the crew members injured. The black box of this plane crashed in India has been located and investigations are in the pipeline, people are giving their condolences to the suffered families. Many experts believe that the reason for the crash could be a result of bad weather. 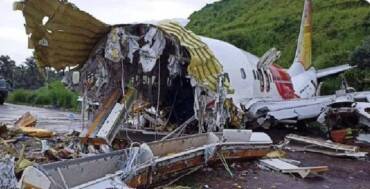 The passengers on the plane were all those who were stranded in the Gulf due to COVID-19. Sadly, though before they could breathe the dawn of another day, they succumbed to the vilest form of accidents known to mankind. The horrific incident has made even the people from around the world to send their warm condolences to India for this tragic loss.

Despite the friction and rigid political differences, Pakistanis are always there to give India a shoulder. Right after the Air India plane crash hit the news, Pakistani celebrities are sending their condolences to India for this tragic loss.

Actor Hamza Ali Abbasi took to social media and offered his grievances to the departed souls.

#AirIndia Extremely sad and tragic incident. Prayers for the deceased and injured. ❤

Later on, even the Bashar Momin, actress Ushna Shah, referred to the year 2020 as an unforgiving year by tweeting.

#2020 is an unforgiving year. Thoughts and prayers for the victims of the #Airindia flight #AXB1344 #AirIndiaExpress

Pakistani-Canadian actress Armeena Khan expressed her grief by adding how Pakistan itself had undergone a similar tragedy and she is still in shock over the horror of the crash.

I remember the PIA flight crash not long ago and now this. Loss of life is always tragic, all humans feel the same pain. My condolences and prayers to the bereaved families. 🙏🏻 #AirIndia https://t.co/JRl8BCR1gG

Even Shahid Afridi took to Twitter to share his thoughts on the plane crash in India. He offered his condolences and wishes for all the injured and bereaved souls.

Really sad to hear the devestating news coming of #Kerela. My thoughts and sympathies with all of the affected families and victims

Even many Pakistanis are sharing their love and condolences for the bereaved.

Prayers and Condolences from Pakistan. And Solute to the Brave Pilot#India #indopak#AirIndiaCrash

Extremely saddened to hear of the Air India Express plane crash in Kerala on Friday evening. I offer my condolences to the families of those affected by this tragedy, and prayers for the ongoing recovery effort.

Well our character is simple humanity comes first we condemn Indian forces brutality in Kashmir and BJP agenda but this does not mean we hate ordinary Indians they are like us and have same problems and issues . Only idiot can celebrate anyone’s suffering my friend

We hope that the families of the victims are capable of overcoming their grievances real soon and our condolences to the Indian plane crash families would be of any help. Although, where many are sending noble thoughts, many even pointed out about irony of fate and Karma. Their stance was that just a few months back, some Indians were rejoicing the traumatic PIA-8303 crash.

Regardless, of what they did, humanity is what the year 2020 truly needs. And it is essential that we see ourselves as humans before anything. Besides isn’t that what Islam teaches us? To not focus on caste, creed, or religion but to see each other as a human.

We offer our condolences to India and hope that the victims are capable of recovering soon. In addition, we also offer our sympathies and grievances to the affected families.

Actor Usman Mukhtar Has Finally Found Someone Special. Who Is The Lucky Girl?
Indian Mob Attack A Muslim Man & Set Him On Fire ‘To Check If He Was Really Dead’
To Top