During the Northeast Delhi riots recently, a violent mob killed a 22-year-old Muslim man. The Delhi Police has confirmed that the mob first assaulted him after establishing his Muslim identity. In addition, after he fell unconscious, the mob set the man on fire.

In court, the police stated that by setting him on fire, the mob wanted to check if he had “actually really died or was just trying to feign unconsciousness”. However, as the victim began moving, the rioters “put wood pieces on him, poured some petrol and burnt him alive”, as per the Indian Express report.

Police submitted these details surrounding the victim, who has been identified as Shahbaz, in the court during the bail hearing of Rahul Sharma. This 24-year-old is accused of the murder. So far, the police have only found a piece of skill and some pelvic bones. The family of the deceased has claimed those to belong to him. In addition to this, the police informed the court that only a DNA test can establish his identity. 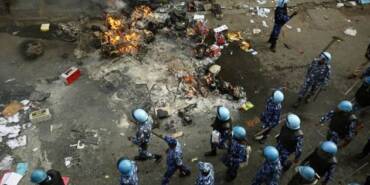 According to the court records, Shahbaz left home to visit a hospital to get some medicines for his eyes. He left around 7am on February 25. His brother Matloob Ahmad called him around 2:25 pm. Shahbaz told him he was trying to reach home through the inner lanes. However, as Ahmad tried to contact his brother again, the calls went unanswered. In addition to this, on February 27, while searching for his brother, a person informed Ahmad that Shahbaz had been burnt to death by a mob.

Mob assaulted Shahbaz after identifying him as a Muslim

Police informed the court that Shahbaz tried to escape by jumping over the wall and running into the water near the bushes towards PTS Wazirabad. Even then Sharma and other rioters chased him and caught him again. The merciless mob dragged Shahbaz to the main road.

In addition to this, the police said, “Aman and Mohit robbed Shahbaz’s wristwatch. Soon he fell unconscious. Someone among the rioters proposed that it must be checked if Shahbaz had really died or was just trying to feign unconsciousness. Some rioters brought some dry bushes and put them on Shahbaz’s face.”

The police also told the court, “Another rioter poured some petrol on the bushes and someone lit a fire with a matchstick. Shahbaz was still alive and started moving. The rioters then broke some rehris (carts) parked on the roadside, they put the wood pieces on Shahbaz, poured some more petrol and burnt Shahbaz alive.”

An ongoing investigation into the case

In order to investigate the case, the police claim to rely on manual identification and dump data analysis. Moreover, they have tracked down the person who first informed Matloob about his brother’s death. This person, who is now a prosecution witness has been questioned by the police. He disclosed that Aman and Mohit, the accused, revealed that they “had killed and burnt the body of one Shahbaz, who was doing the job of welding in their area.” 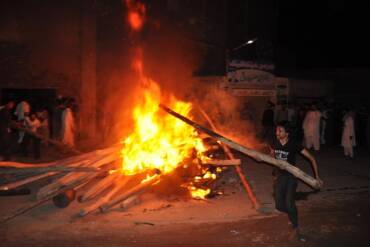 According to the police, Aman confessed that on February 25. In the court, the police affirmed, “He in conspiracy with his friend Mohit had caused harm to the life and property of persons belonging to a particular community to teach them a lesson. On that day, he along with his friend Mohit and other rioters assaulted, robbed and killed Shahbaz and thereafter burnt him alive.”

However, the police allegations against Rahul were denied by his legal team. This is not the first time the Hindus burnt a Muslim alive. In March 2020, an 85-year-old Muslim woman has also been burnt to death. Additionally, before that, angry mobs burned down a mosque in Delhi.