Indian Labeled "Harami" For Reading An Urdu Book In Delhi 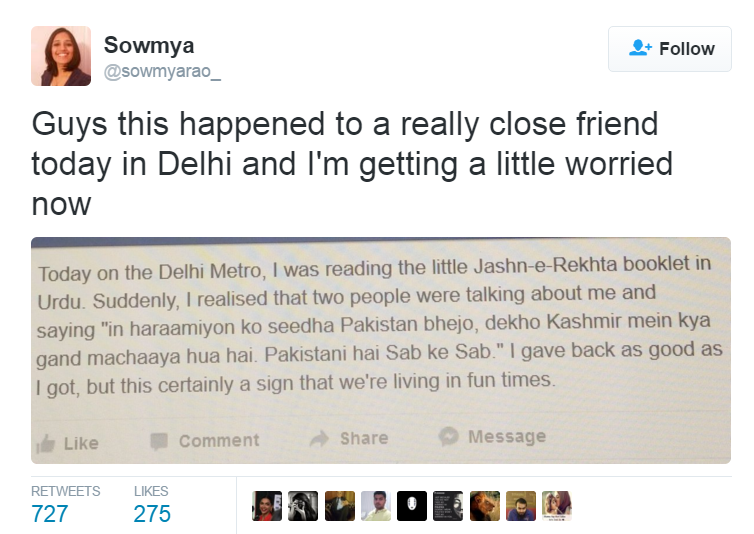 Intolerance has become a telling feature of the nations of the subcontinent. While we do have stories and people who have proven otherwise from time to time, the mainstream perception of people who are supposedly not “one of us” remains marred by hatred, conservatism and bigotry.

A recent event at a Delhi metro exemplified the aforementioned notion; a woman posted a screenshot of a friend’s Facebook status, who was on the receiving end of some rude comments after being seen reading an Urdu booklet, “Jashn-e-Rekhta”.

The comments aren’t just plain mean; they highlight the deep rooted resentment that the two people in particular, and many Indians in general feel towards the Pakistani’s. One thing that must be kept in mind, however, is that the majority of our nation feels the same way about India too. So the hatred that they feel for us, is merely a reflection of the hatred that we feel for them too.

The only party worth criticizing is the supposedly “nationalist” ideology that we’re being fed, both the Indians and the Pakistani’s, about how loving India = hating Pakistan, or loving Pakistan = hating India.

For starters, it’s not about ‘loving’ the other country; it’s merely about being accepting of the differences that both countries may have, and understanding that those differences does not mean you must hate the other party to the point of such stark intolerance.

Thankfully, we had some sane replies too:

Urdu, or any language for that matter, transcends beyond any religion. With populations as diverse as that of India’s and Pakistan’s, it’s high time we learn to embrace it, and become accepting and tolerant of differences.