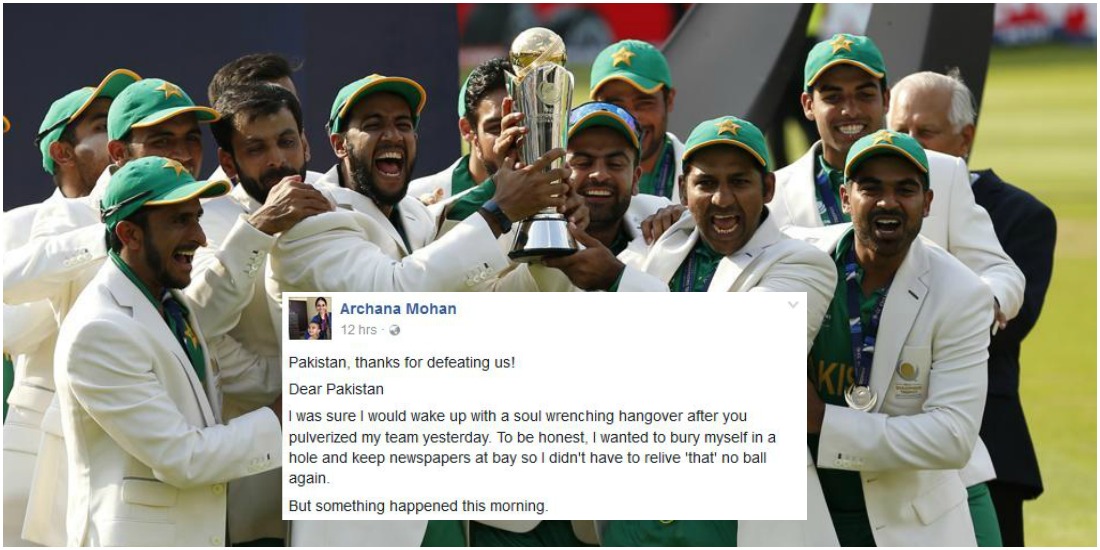 Just last night, on the eve of 18 June 2017 Pakistan secured their first Champions Trophy by defeating their archrivals India by a margin of 180 runs. The western side of the former subcontinent exploded with celebration whereas the eastern side took turns to empty their rounds on the Indian team as they watched cricketing maestros, such as MS Dhoni, Kohli, and Yuvraj, fall to Pakistan’s deadly bowling attack. Among the best rivalry in sports, the Indian captain Virat Kohli retained honor for his team by admitting to the class shown by Pakistan and vowing to get back up.

Although both the nations spewed deadly poison and fire towards each other before the match, the end result calmed everyone down, especially the sane ones. Those Indians who did not set fire to the posters of the Indian team destroyed television sets, and rioted out on the streets were busy congratulating Pakistan and explaining the beauty of this cricket rivalry. Among them is Archana Mohan and here is what she has to say: 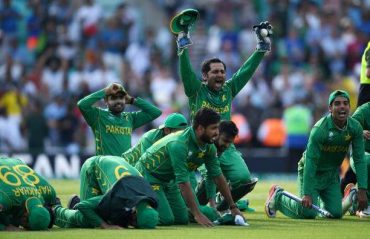 “Pakistan, thanks for defeating us!

I was sure I would wake up with a soul wrenching hangover after you pulverized my team yesterday. To be honest, I wanted to bury myself in a hole and keep newspapers at bay so I didn’t have to relive ‘that’ no ball again.

But something happened this morning.

Instead of the pooja room, where she usually offers prayers every morning, my mother in law was in the living room, waxing eloquent about Mohammad Amir. ‘God works in mysterious ways,’ she said. ‘The boy who made a mistake in his youth has grabbed his second chance. What a great redemption!’ 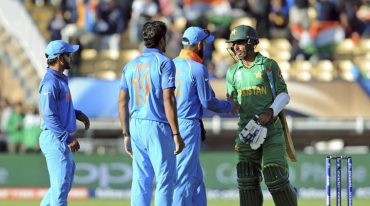 ‘I wish we had players like theirs’, my husband said ruefully. ‘No factory produced pieces.
From the by lanes of Peshawar to an ICC event, they are cricketers in the purest sense’, he said dreamily.

‘And what about that boy Fakhar Zaman’, my father in law, said, his cup of filter coffee simmering just like his voice. He is a Navy man no? That’s what a soldier does for his country,’ the ex-serviceman said proudly.

At work, the colleague who had only a day earlier tweeted a crude slur on Pakistan confessed he had watched everything there was on Youtube about Sarfaraz Ahmed. That man, he said sheepishly, is something else.

On my social media feed, there were dozens of messages congratulating Pakistan and saluting their never say die spirit. ‘Marry me Babar Azam’ said one of them!

What if India had won? I shudder to think of how low some of us would have stooped in our boorish behavior. 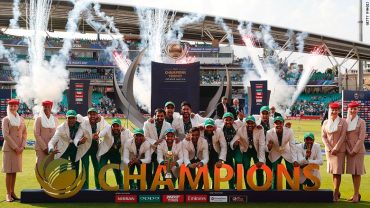 It has been a tough few years for Pakistan. Lack of finances and the reluctance of other teams to play there on account of security reasons has crippled them to some extent but as this win shows, you can never write them off. Irrespective of the result, I am sure, we will always remember this unbelievable comeback from the team that was expected to crash out in the first round itself.

I can’t believe that I am saying this, but thank you Pakistan for winning the match. Thank you for being an inspiration.

India may have ended up second, but many of us won something more important than a shiny trophy – the tag of being a good sport.

Perhaps there may still be hope for the two countries after all!

Although such a tie in cricket means a lot for both the countries, so much that almost 1 billion people watched the match, it is completely illogical and let outrage and anger in defeat. Not just the Indians, but even Pakistanis do not hold back when the time comes. If we all just remain professional and true fans of cricket, maybe things would seem a lot more beautiful.

Momina Mustehsan Teams Up With Dil Ro Raha Hai Guy In This Video!
11 Different Ways Pakistanis Use The Word, “Yaarr”
To Top