Indian Businessman, RK Jhunjhunwala, Accused by a Woman for Sexually Harassing Her on a Flight! [Video] - Parhlo 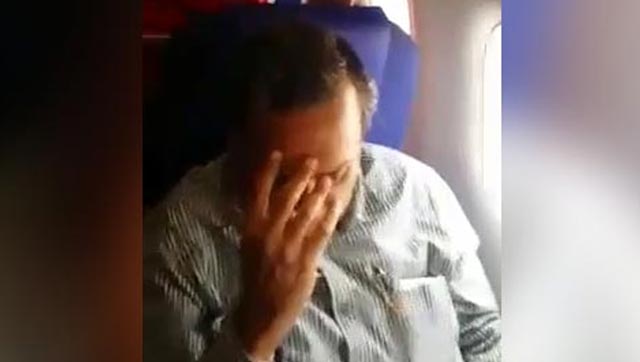 RK Jhunjhunwala, 60-year old Indian business man, based in Singapore became the center of controversy after a woman accused him of trying to touch her inappropriately on a flight. The woman posted the video on social media to support her case.

Police arrested RK Jhunjhunwala on 27th January after the flight from Mumbai landed at Biju Patnaik Airport in Bhubaneswar, on the complaint of the woman.

The two minute video, showing RK Jhunjhunwala slumped in his allocated seat inside the plane with his face partially covered by his hand as the woman yells at him, went viral on social media in no time.

The woman’s allegations were refuted by RK Jhunjhunwala’s family and they said that he will file a defamation suit against the people damaging his reputation and image on social media platforms.

In his defense, RK Jhunjhunwala said that he touched the woman’s hand due to a ‘jerk’ when the plane was landing.  He told the media:  “Even though I had not done anything wrong, I had to apologize to her as she made a big issue out of nothing in front of co-passengers. Besides, they shot a video and put it on social networking sites.”

According to the complaint filed by the woman (30-year-old), who hails from Bokaro, Jharkhand, RK Jhunjhunwala sat behind her on the flight. RK Jhunjhunwala allegedly touched her during the flight. At first, the woman ignored, but she brought the matter into the attention of the cabin crew when he repeated the act.

Indigo ground staff informed Central Industrial Security Force (CISF) personnel about the incident, after the flight landed. RK Jhunjhunwala was handed over to the airport police station after being detained by the CISF initially.

Police filed the case against the businessman under Section 354-A of the Indian Penal Code (making physical contact and engaging in unwelcome sexual overtures).

As the flight crew and co-passengers could not be examined, RK Jhunjhunwala was given bail. Satyabrata Bhoi, Bhubaneswar’s additional commissioner of police said:  “He has deposited his passport with police and given an undertaking that he will appear for investigation as and when asked. The investigation is on with the police looking at all angles.”

The media failed to reach the woman to comment on his bail.

RK Jhunjhunwala believes that there must be ‘some ulterior motives’ behind this allegation, as he was a senior citizen with no criminal background and the video did not include his apology. RK Jhunjhunwala said:  “I am consulting my lawyer for all legal options.”

Seven ISIS Militants Were Shot Dead by an Iraqi Father to Avenge His Son’s Death!
Amitabh Bachchan Joins The Commentary Team For Pakistan and India’s World Cup Match!
To Top