The fear of terrorism is far less than what it once used to be. Pakistan’s war against terrorism was ongoing for about a decade. However, it is quite inspiring to see how the army was able to abolish and minimize the war against terrorism in a few years. The main question is who has been lobbying these terrorist groups and how they have become so strong.  The recent failed attack on Pakistan Stock Exchange is providing us a lot of answers.

The minute the attack went viral and Pakistani soldiers’ bravery was seen a series of assumptions have been made due to the different rising questions. The most surprising thing that came out of this incident is how India has been reacting to the news. The first one that is making us put our thinking caps on is why is India so worried and all kinds of jittery; the second why was the BLA ever ready to accept the claim.

Pakistan’s enemy is naked in its aggression. Make no mistake, today’s attack in Karachi is state-sponsored terrorism against Pakistan. Our valiant countrymen and women have fought against this menace before and our resolve remains resolute.

Now you might ask what the BLA is. BLA is a Baloch Liberation Army that is carrying out different attacks against Pakistan. The question is how are they getting enough ammunition to fight Pakistan, with grenades to guns to everything. Another thing more suspicious is, isn’t India’s RAW a bit too callously irresponsible at times? 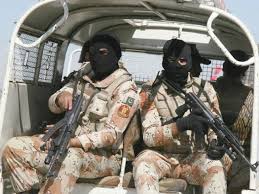 More so, our interest is also piqued on the fact how are these people capable of getting expensive cars without number plates and entering into the main city with so much ease. It doesn’t seem something a poor illiterate organization could do with so much ease. If anything, it all seems like a well-planned ordeal.

BLA is not representing the Baloch Nation its terrorist organization funded by India, Being a Baloch I condemn the attack on Pakistan Stock Exchange.
Long Live Pakistan….#KarachiTerroristAttack pic.twitter.com/2JLbZOoKAy

Is there more to the existence of BLA than is being portrayed by the media, well by media we refer to many journalists who have been making rather controversial claims recently. It all seems very fishy. Don’t you think?

The reaction of Indians

The answer to this was made much clearer today. And for all Indians out there. You might not like it. The answer is India! From the applauding tweets to promoting the attack, it seems quite clear what the aim was.

The minute the news of the attack on Karachi Stock Exchange was reported, a series of on and off banter began, but it also made us wonder, how much hatred can one human have in their heart.

#KarachiStockExchange
Amid covid- 19 crises Terrorist are working from home.What you sow so shall you reap.

OMG, these beggars have stock exchange !!!😂😂

What the fuck these radical islamic terrorists do with stock exchange !!!😂😂 pic.twitter.com/32YI7QOAjD

Although this isn’t the first time, Indians have acted rather abrasively, we are truly thankful to the brave and courageous soldiers who risked their lives for the sake of saving Pakistan.

From making fun of the PK-8303 airplane crash, the country is always bent on portraying its rival Pakistan in bad limelight. However, it seems things went a bit out of hand now because of promoting a terrorist attack! Really? That is beyond sociopathic if anything!

Not only this, what surprises us is how timely the responses have been pouring in? Were they somehow magically aware? Most importantly how did they manage to get enough funding and money to conduct such an attack? This also reminds us of Ex-Indian Major Gaurav Arya’s statement saying he is in contact with many Baloch separatists.

And when has fascist thinking come to an end in India? How many more times does India desire to face defeat to get the message? Pakistan is a nation of purity and strength. We know how to fight back and how to defend ourselves. Period.