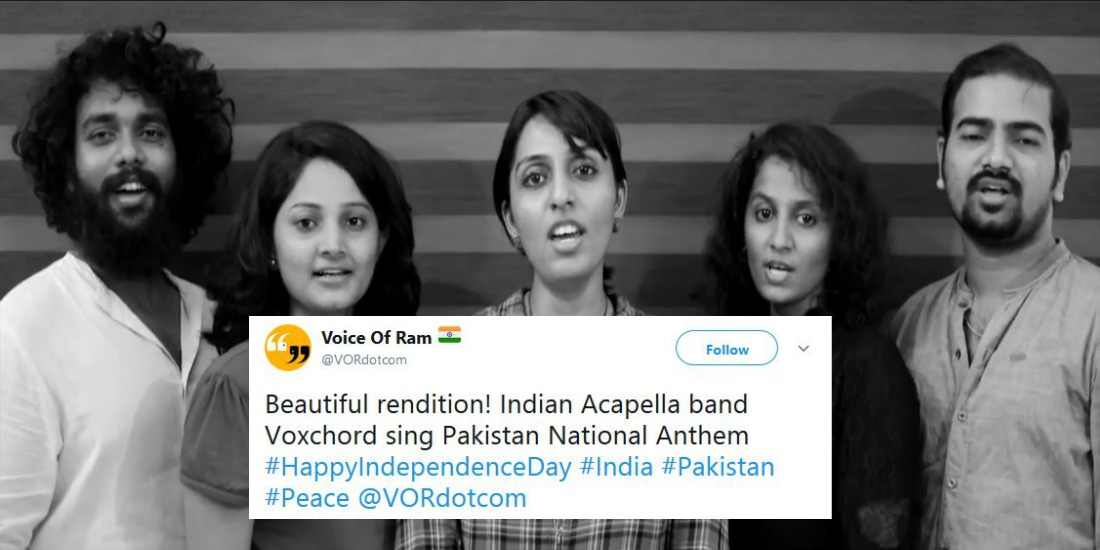 Time and time again Pakistan and India have worked together to grow love towards each other, and destroy the politically motivated hate among masses from both sides. In many cases, these works of friendship have been led by small private organisations and even some NGOs just to make both the sides realize that intricate matters can be solved only if there is will and harmony. On this year’s Independence Day, it has been an Indian band who offered its love by giving Pakistan a unique surprise.

The Indian Acapella Band Voxchord has worked to produce a beautiful version of Pakistan’s national anthem as a gift to Pakistan’s 70th year of Independence. The video that was released on YouTube begins with a short harmonious note of love towards Pakistan and is quickly followed by the band singing Pakistan’s national anthem. In a unique note and tone, they have orchestrated the whole anthem, keeping up with the tempo and respecting each and every word. Here is the video below:

The note at the beginning says: “This Independence Day, we’d like to dedicate a song to our neighbours. A song about faith, pride and grandeur, of power, progress and perfection.”

People from both the sides believe that if politics was not involved, then there would have been peace between the sides no matter what happened in 1947. After all, apart from religious differences, Indians and Pakistanis share the same kind of characteristics in all aspects. It is indeed disappointing that both sides have to spend millions, or rather billions, of their rupees just to reinforce their armed forces when the budget could be spent on so many other areas that raise a nation to great heights. We wish peace and tranquillity to prosper between the two grand states!

Mahira Khan Talks About India-Pakistan Similarities and It Definitely Spreads Amaan ki Ashaan!
You Need to Stop Everything and Watch This Ad If Your Sibling Is Getting Married
To Top