India To Make Drugs With 'Cow Urine & Dung' For High Intellect In Children & This Is Gross!

The world is full of different religions connecting to a vast cultural divergent belonging to the human race and then there are Indians. The unorthodox practices that come out of the Hindu majority state of India completely sabotage the basic human mindset. Time to time, an extremely bizarre perception appears from the other side of the border and the perceiver finds it hard to accept, not Indians.

Some time back, internet users saw an unusual thing added in the online selling market which later became another reason to laugh on India’s lame thinking. Last month, a halal gomutra (cow piss) was being sold on the internet and poor naive Indians became a bashing target for the world. Once more, the Indian government has become a laughing stock after a government department has decided to manufacture drugs for ‘intelligent children’ made of cow piss and dung.

A commission of Indian government called the ‘Rashtriya Kamdhenu Aayog’ works for the welfare of cows in collaboration with the Ministry of AYUSH. According to the research of the commission, in order to make the young and future generation of the country highly intellectual, pregnant women should use the cow piss and dung drug if they want their born child to be extremely brainy.

The purpose behind the creation of Rashtriya Kamdhenu Aayog!

According to sources, back in February 2019, the Bharatiya Janata Party (BJP) government under Prime Minister Narendra Modi’s leadership approved the proposal of Rashtriya Kamdhenu Aayog. The commission was set up to conserve, protect and develop the cattle population in India. The recent plan to create drugs from cow piss and waste with milk, ghee, and curd was also advised by the same commission.

Here’s the press release of the acceptance of the commission! 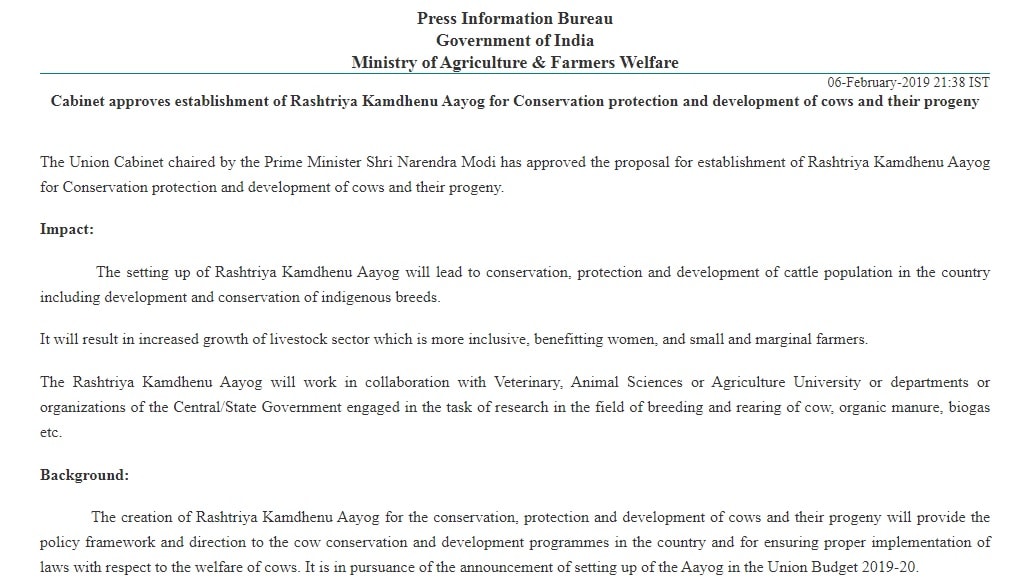 Well, what else can one expect from a nation whose daily thoughts are full of sh*t. The nation whose only tension every day is to find the perfect spot to take a dump as the country is short of toilets. Leaping over such facts, Indians are so freaking obsessed with waste that now they want to implement the filth on their children too. What the actual drug?

Check out: Indians One-Up Themselves As They Plan To Assign Number Plates To Cows and Buffaloes

No idea, what the brainless Modi Sarkar will come up with in future regarding India’s favorite cow waste. What the Indian government is doing accurately describes the level of thought-process the endure.

Misbah To Pocket Rs. 2.8 Million From His Dual Role In PCB
Sonya Hussyn Just Shut Off Yasir Hussain’s Troll On Her Picture And Damn, She’s Savage!
To Top