Two months back, a student of Institute of Management Sciences, Peshawar wrote a post on Facebook after he encountered a creepy insect in his food served at the university. Normally, educational institutions are handed whole criteria regarding the cleanliness of cafeterias and considering the recent raids by the food authorities over illegal and unhygienic restaurants and cafeterias across the country, the need for utmost cleanliness is a priority, therefore.

In May, this guy wrote the following post after coming across a bug in his food. He also reported the management at his university.

However, instead of coming to acknowledge his feedback and taking measures to eliminate such a bad experience, the University took a step that is very shocking.

The university released the following document bearing witness of Shahzad Haider Khan’s rustication, the reason being accusing the university and forwarding baseless and defamatory remarks against the Institute. The University considers it a ploy against them and in order reprimand their student, they just rusticated him. 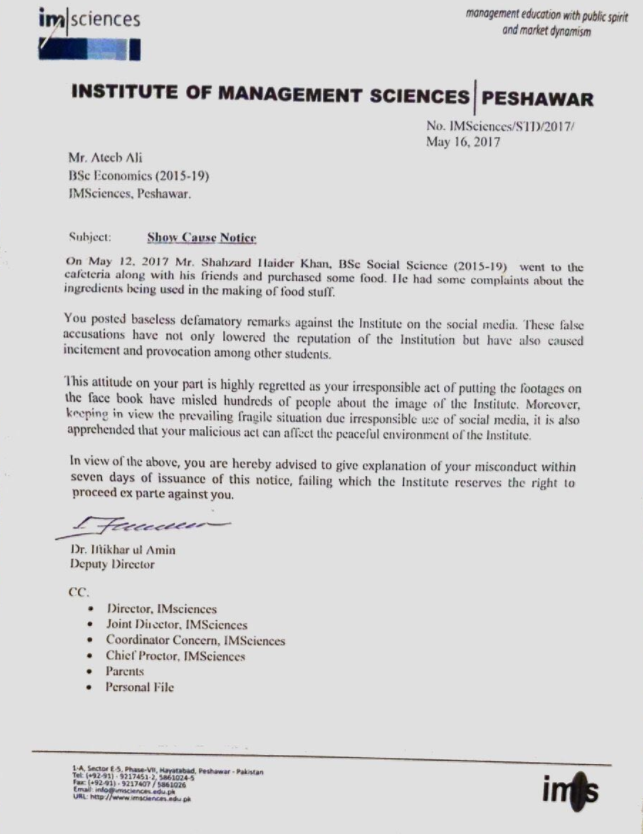 Instead of resolving this issue and perhaps compensating this disgruntled student who was fairly liable to report such a shambolic incident, the university instead turned the tides against him and put him to blame rather than taking responsibility.

Followed by, Shahzad wrote another post reporting filing a lawsuit against his university for rusticating him over the baseless accusation. He also shows his adamant approach towards it and claims that he would not buy the accusation.

This is what he wrote:

So I have been rusticated from IMsciences for sharing a video on social media of an insect on my plate. According to the administration, my post brought shame to the Institute although I apologized (for doing the right thing*) to them several times. I will be going to court against this decision once I’m back from the US.

According to legit sources, the university administration wants to teach me a lesson and make my case an example for other students. But let’s see who becomes the example.

I shared what was right, and I stand by my words. The students have faced the same problem in the past and the problem is still there. Fix it. I will share it again until it’s fixed and my fellows will support me just like they did last time.

My degree is at stake, but if that’s all that it takes, you have done a very little damage, my friend. I feel sorry for the little powers that you posses and misuse. I prefer not getting a degree for which I have to eat insects, flies, and bugs (pictures coming soon). I’m happy to sacrifice for what is right. This might be the only opportunity I had to speak up for my friends, teachers, and administration who all eat from the same kitchen, against a rich private entity who is there only to make money. Probably the only right thing I have done in my life.

I might not get justice from the court because you have much more resources than I do, but as far as I know, Allah ki adalat ma kisi ko bhi grehbaan se pakra ja sakta hai khwa wo director hi kiun na ho. See you on the other side!

No regrets. It has, and it will be a fun journey full of learning. Thanks to all my friends for the support. Speak up, or tomorrow it can be you eating that “Garam Masala” because the administration said so. Peace!

So I have been rusticated from IMsciences for sharing a video on social media of an insect on my plate. According to the…

How the university managed to deal with it is indeed shocking. What do you guys think about the step taken by this guy’s University against him?

The JIT Delayed Announcing the Results of Panama Case and Pakistanis Are Furious!
A Great Initiative By The Health Department Of KPK
To Top