Javed Hashmi lost the seat that he had won twice in the past. Javed Hashmi won the seat, not as an individual but with the strong support of first the PML (Nawaz) and then PTI. This time Javed Hashmi wanted to test the waters of his own popularity by contesting as an individual under the label of independent candidate.  What happened, when Javed Hashmi tried his luck this way. This self-claimed Bhaaghi , ironically called Daaghi by Shah Mahmood Qureshi after Javed Hashmi left PTI, lost his seat to a relatively unknown political rival in his hometown Multan . Strange are the ways of politics. We may draw an analogy from films, no producer, director can predict if the next  film will be a hot or a flop. In English Premier League, a fourth division team defeats a major first team. Why do these things happen ? In the same scenario , a seasoned politician can never predict the outcome of an election. How will the common man, public react in hotly contested seat ? Still, our self-obsessed leaders think that they can cheat the common the way they like. They do not believe in the evolutionary educational process of the masses. They have a firm faith in the ignorance of the masses and they see them as naïve, simple, always ready to be cheated. They never try to scientifically analyze the forces that led to defeat. They try to escape the easily and most accepted route and that is elections are rigged if I lose but they are fair if I win. This is a dire need to understand the rationale that leads to the sudden fall of  these leaders.

First of all, what is the political integrity of my leader. Will he sell himself to the first good offer received or will he stick to his party’s ideology no matter what happens. I study the history of the leader and make decisions. Things are changing fast in a country like Pakistan. These  politically manic people, from a street bear to a business tycoon, walk, talk, eat politics. They have in the process learned the tricks and games of politics. It is now, increasingly difficult for leaders to lead them into a state of “willing suspension of disbelief” and make them belief every word that they utter. People now follow the paths of these politicians, when did join a party, when did they leave a party. Why did the leave a particular party and at what political point did they desert the party. All this information is stored in the mother-board of our brains and is retrieved whenever we want to do so. Therefore , they have to understand that you cheat some of the people some of the time but now it is virtually impossible to cheat all the people all the time.

Secondly, the politics of personality cult is gradually drawing to a close. We belong to a nation of hero-worshippers but slowly and steadily we are also slipping into party politics. Discussions in the drawing rooms of seasoned political leaders, or professor’s common room in a university, or in a barber’s shop all talk about policies of a party rather than the leader. They belief that deeds are greater than words and the questions is not who but what has he done. What is the track record of a certain party. Look at the way votes swing from one party to another in cities and especially in Khyber Puktoonkhua. Gone are the days when people voted for a Bhutto or Wali Khan. 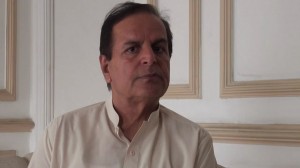 As the conscious level of the common man grows through education, mass media, discussions, political debates people want tangible results and not empty promises. A party is always bigger than a leader, in India Congress has survived without Nehru or Indira Gandhi, in Pakistan People’s Party lost both Zulfiqar Ali Bhutto and Benazir Bhutto but the party goes on even without them. The examples given here are of people who were immensely popular and were recognized world leaders. They had a standing among the top world leaders. However, if we look at the case of Mr. Javed Hashmi, always a second rate leader, who relied more on the art of oratory rather than concrete politics. Javed Hashmi was made to believe that he was the soul and life of the party and without you it may not survive. This led to a wrong assumption, on his part that he can now dictate his terms to the party leaders be it Imran Khan or Shah Mahmood or the sly Sheikh Rasheed. As in the case of Javed Hashmi, people take it for granted that they are bigger than the party. They need to understand the difference between a worker’s loyalty to a leader and to a party. The party, no matter which party has an ideology and the people drift towards the party because of it. Bhutto, was one of the finest and acknowledged leaders of the country but the rise in his popularity was behind the popular slogan of the party ‘Roti, Kapra and Makan’ that caught the imagination of the masses and won a landslide victory for PPP.

Like a great football player without playing for an internationally recognized team is no one. Even our great cricket players were known, recognized, honored and respected as long as they were part of the team . Once they left the team they became no ones. A leader has to confess that the party support is a vital factor to make him a leader. The moment you desert a party a large group of followers also desert you. This was clearly evident in the election held today, as  Javed Hashmi won the elections in the past because of party support and lost the recent election because they was no party support behind Javed Hashmi to fight for him.  In addition, to party support his age and his health are not on his side. It may be the beginning of the end for Mr. Javed Hashmi if he does not join a party.