"I Will Not Fear Sacrificing My Life, But I Will Not Spare These 'Chors and Daakus'" - Promises PM Imran Khan!

For the first time in Pakistan’s history, the law was above the corrupt politicians that abused the power they held for far too long. After placing Nawaz Sharif behind bars, Asif Ali Zardari and Hamza Shahbaz faced the same fate at the hands of the National Accountability Bureau (NAB). Altaf Hussain, leader of MQM too was taken into custody by the London police yesterday.

Prime Minister Imran Khan addressed the nation on Tuesday after these major arrests along with the unveiling of the annual budget for the fiscal year 2019-20 and it was one of the most powerful speeches he has given after handling PM’s office.

“Do whatever you want to do but each and every one of you, who have done wrong to this country, Insha’Allah I will not leave them”, Imran Khan.

The premier mentioned how he prayed to God to give him one chance and even if his life goes he will not leave the thieves alone.

“Try to blackmail me that I will lose the government; this is a very small thing to lose a government, even if I lose my life I won’t spare these goons and thieves, this is my promise to my nation. What they have done to this country I won’t spare them.”

The prime minister started the address by sharing his vision of Naya Pakistan which will be based on Riyasat-e-Madinah. “Remember my words, Pakistan will be a great nation”, he added.

An Inquiry Commission will be established to probe into the matter of Rs24,000bn debt collection in a span of 10 years.

Imran Khan said during his address: “I’m making a high-powered inquiry commission with only one agenda – how did they raise the debt to Rs24,000bn in 10 years?”

The commission will comprise of Federal Investigation Agency, Intelligence Bureau, the Inter-services Intelligence Directorate, Federal Board of Revenue and Securities and Exchange Commission of Pakistan.

Clearly, the PM is not taking any more chances with the corrupt bigshots and has plans to not let anyone roam freely.

“All those in power will be fully investigated by this commission which will prepare a report so that no one dares to leave the country in tatters ever again.”, said Imran Khan. 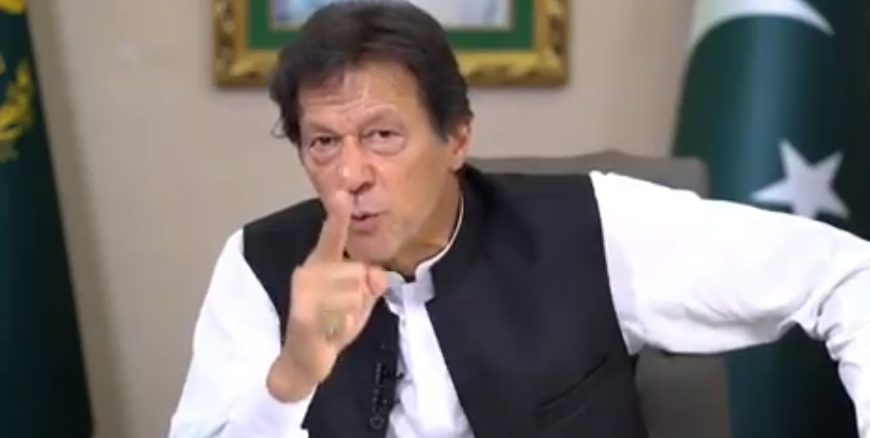 He stressed upon the fact that these parties and their supporters are raising their voices against PTI government after the arrest of their leaders when in fact the government was not involved. Imran said NAB is not theirs and judiciary is independent.

Imran Khan has shown a strong resolve to bring the looters and corrupt officials to justice. This is an example of a true leader and not a puppet and we hope he takes Pakistan in the direction of success and prosperity as he envisions.

This Is What Islam And Hadiths Say About Ghazwa-e-Hind!
For The First Time In History, PM Imran Khan And His Cabinet Will Reduce Their Salaries By 10%!
To Top