Prime Minister Imran Khan has received tons of love as he arrived at the Islamabad airport today.  The PM returned after finishing up his visit at the United Nations (UN). His speech at the UNGA gained recognition and praise all over the nation. The PM made sure to retain his focus on significant issues within the speech, especially including the Kashmir dispute. Now, as he has made his way back into his home country, people are once again showering him with compliments.

PM Khan was accompanied by Foreign Minister Shah Mehmood Qureshi, Special Assistant to the PM on Overseas Pakistanis Syed Zulfiqar Abbas Bukhari, Adviser to the PM on Finance Dr Abdul Hafeez Shaikh, along with a bunch of other officials. He received an amazing reception by the cabinet members and Federal Ministers belonging to Pakistan Tehreek-e-Insaf. Moreover, numerous PTI activists arrived at the Islamabad airport to welcome the Prime Minister. 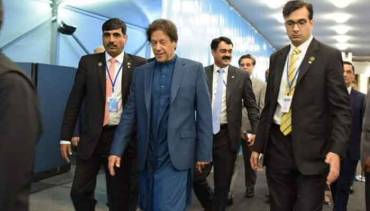 The entire nation is diverting their positive energy back to PM Khan after his historical speech. No other Pakistani leader has been able to give such a touching speech before. Khan addressed the unreal situation in Kashmir along with untouched issues like Islamophobia and climate change. This demonstrates that Pakistan finally has a leader who has his priorities set perfectly straight. It is heart-warming to see that Khan stood in front of international leaders and told them about the atrocities within Kashmir.

Not to mention, Twitter has went absolutely haywire as the Prime Minister set foot in Pakistan. The hashtag “WelcomeHomePMIK” is trending at number one in the nation currently. Even the official page of PTI on Twitter posted, “First and foremost; I want to thank my nation. The way that you prayed for us, the way that you prayed that we can fight the case for Kashmir; going through a difficult time, at the U.N”

Here is a video of Prime Minister Imran Khan’s speech at the airport. His influential words continue to impress the citizens of this nation.

This demonstrates the excitement regarding Khan’s return. It is for sure that people might have not shown such a reaction if Khan’s speech wasn’t convincing or powerful enough. But, right now, it appears that the Prime Minister is gaining his supporters back. However, there have been people mentioning that Khan should prove his excellency through his actions and not only through his speeches. It is still unclear how the legacy of PM Khan might end, but the citizens are wishing that his governance remains beneficial for the country.

Take a look at some of the interesting reactions from Twitter:

This user rightfully compared PM Khan to a lion!

The lion returns home 😍
He went to US as the PM of Pakistan and returned as the LEADERS OF THE ENTIRE MUSLIM UMMAH.
ALHAMDULILLAH 💕#WelcomeHomePMIK #پاسبان_امت_خوش_آمدید pic.twitter.com/QTLug0nIug

Once again, we can all agree that his words were truly ‘golden’!

Thank you khan sahab for reminding this country with your ever green Golden words!!❤#WelcomeHomePMIK pic.twitter.com/QGfl5DqT2m

This is something a lot of Pakistanis would agree on.

This is million dollar statement by a million dollar great leader of Muslim world.
He told that when you are clean hearted and dignified person you don’t fear anybody anywhere.
The whole world respect and love you for this. #WelcomeHomePMIK #پاسبان_امت_خوش_آمدید#UNGA #Kashmir pic.twitter.com/bsLz5glZ5q

What do you think of the situation? Do you believe that this response is suitable and that PM Khan deserves it? Share your thoughts using the links below.