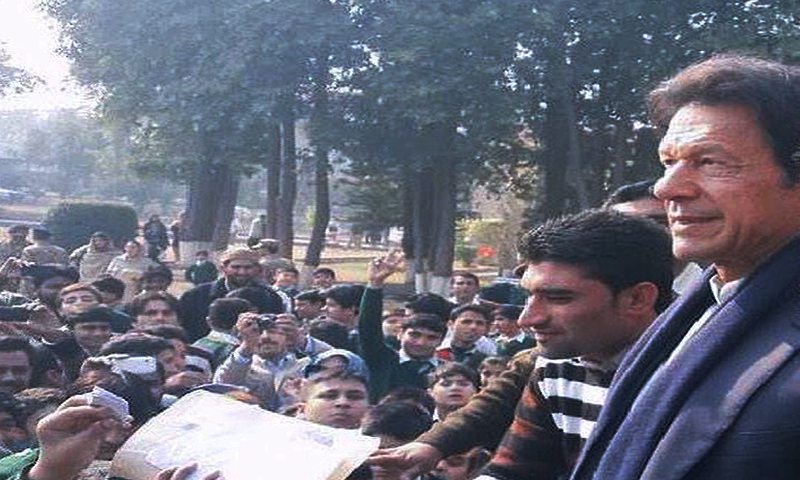 The newlywed couple (Imran Khan and Reham Khan) visited APS Wednesday morning. However, the chairman of Pakistan Tehreek-e-Insaaf (PTI) was expected to visit the school on 12th January on the occasion of the school’s reopening after the deadly Peshawar Attack that left 150 people dead, including more than 132 students.

Family members and loved ones of the victims who lost their lives in the Peshawar Attack gathered outside the school today, as Imran Khan, Reham Khan and Pervez Khattak (Chief Minister, KPK) along with other party members arrive at APS amid fool-proof security.

Parents express their anger of Imran Khan’s… by GeoNews

The protesters held posters and banners against the provincial government and even tried to stop Imran Khan’s vehicle from entering the school. They complained that PTI led provincial government failed to show any concern regarding the school or its students. The protesters also lamented that it took Imran Khan almost a month to come to Peshawar and talk to the students after the lethal Peshawar school massacre.

Imran Khan had tweeted that he, along with his wife Reham Khan and Pervez Khattak were going to visit APS, but they were suggested to postpone their visit in view of the Chief of Army Staff’s visit to the soft re-opening of the school. However, Imran Khan said that they would visit the students of APS later this week.

Talking to the media personnel outside the Parliament House, the information minister Pervaiz Rashid said that because of Imran Khan’s negative approach in politics, he had to face ‘Go Imran Go’ slogans today, when he arrived at APS Peshawar for visiting the children.

He added that the PTI chairman has created hurdles in the way of implementing Pakistan’s agenda of eliminating terrorism.

Reham Khan’s Ex-Husband Rejects Domestic Violence Allegations
ONLY a Man Can Understand This!
To Top