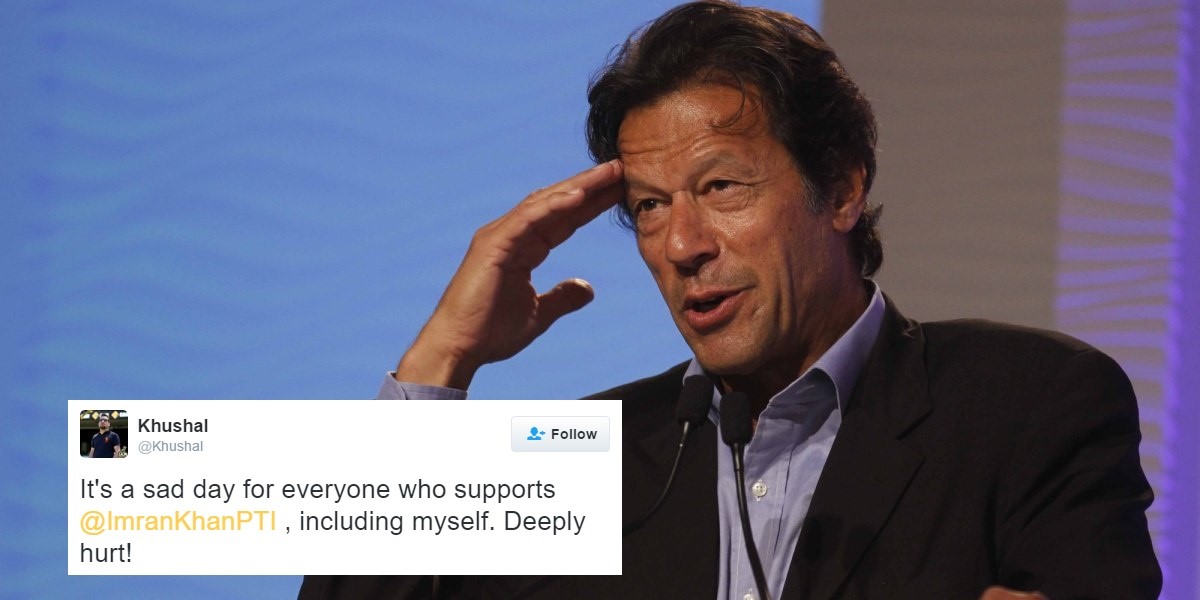 Amidst the political chaos happening in Pakistan every now and then, the war between PMLN and PTI has no limits. Both these parties share no fear in proving the flaws and the bitter truth about each other.

Pakistan Tehreek-e-Insaaf’s (PTI) chairman Imran Khan is largely known for his educated mindset. However, his recent statements on a number of occasions are proving otherwise. His hatred for PMLN and Nawaz Sharif is overshadowing his abilities we all once admired.

Initially, Khan shared his concerns on why organizing PSL final in Lahore would be unsafe.

No one wants int cricket to return to Pak more than me. But staging the PSL final in Lahore carries huge risks with no benefit at all.

Given how the security issues are in Pakistan, Khan made valid points:

A match played under a tight security ring around the stadium will exaggerate Pak’s security issue https://t.co/08D7d5Z7rm

And God forbid if any mishap happens we can say goodbye to int cricket in Pak for the next decade https://t.co/5WkOJi0aWa

Following these tweets, there were a number of speculations claiming that Khan has denied going to PSL final because of hatred for PMLN and Najam Sethi. However, a number of PTI members including Sheikh Rasheed enjoyed the return of international cricket in Pakistan by going to the stadium.

KP representing at the PSL final tonight! People of Pakistan, you have an amazing spirit! #PSLFinalLahore pic.twitter.com/12BhApzUik

The party’s official Twitter page also encouraged the #GoNawazGo chants which were chanted during the PSL final.

In yesterday’s conference, Imran Khan was asked questions regarding PSL players and he used words such as “Phateechar” and “Rellokatta” by sharing he has no idea regarding who these “foreign” players were. Mocking PSL abruptly, Imran Khan continued saying how these players held no significance in the world of cricket.

Imran khan making fun of International cricketers in his Press conference according to Him WC winner Summay is :

After his statement went viral on social media, many PTI followers showed how disappointed they were after hearing what Khan said.

Defending the score 59/all out is much easier than defending statements of Imran Khan. #PSL2017

for the first time ever in my life, i’m so disappointed in you @ImranKhanPTI https://t.co/Buvm5VOjSz

Imran Khan needs a Farooq Sattar to ‘explain’ his statements.

Sorry sir but you need to apologise. @ImranKhanPTI

It’s a sad day for everyone who supports @ImranKhanPTI , including myself. Deeply hurt!

Have never in my life felt so embarrassed to defend & support Imran Khan. Today he showed how petty & classless he is.

Imran Khan turns out to be another one of my poor life choices, now I can’t think of a sane person to vote for in the next elections.

WILL NEVER VOTE FOR PTI…DIVIDERS OF THE COUNTRY. GO TO HELL IMRAN KHAN AND YOUR SUPPORTERS.

Yes, we will all play the blame-game, pointing out how PMLN is worse than PTI and vice versa. What many of us don’t realize is that we took Imran Khan as the ideal and now he continues to stoop low day after day.