Prime Minister Imran Khan yesterday urged the world for debt relief during these times of adversity. The main subject of his speech was financial institutions, the United Nations (UN), and rich countries. However, people on social media including his former wife Reham Khan criticized the premier for wearing informal clothes while communicating with the world.

My appeal to the international community, the UNSG & international financial institutions to respond positively to the dilemma confronting developing countries in the face of the COVID19 pandemic. #Global_Initiative_Debt_Relief pic.twitter.com/EfydRhfZhc

“This is the issue with most countries of the developing world suffering from very high debt to the GDP ratio, so the problem in these highly indebted countries is that they now face lack of fiscal space,”

Imran Khan said, “We do not have the money to spend on already overstretched health services, and secondly, to stop people from dying of hunger.” 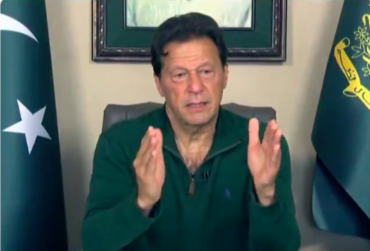 “Therefore, I appeal to world leaders, to UN secretary-general (Antonio Guterres) and to heads of the financial institutions, to launch an initiative, an initiative that will give debt relief to developing countries to combat the coronavirus,” the PM said.

“To give an example of Pakistan with a population of over 220 million people, so far the maximum stimulus we could afford is $8bn, and this is the issue with most of the developing countries,” he asserted.

Reham Khan, the former wife of PM Khan, who always tweets about ‘Naya Pakistan’, says he needs “Chanda for clothes. “Furthermore, Reham said, “Does he know his time is up? Not bothering with Sherwani now!!”

The PM of Pakistan really needs to be given Chanda for clothes!! Tracksuit & that too a dreadful one for addressing the international community!!!! Has the Ladla given up?? Does he know his time is up? Not bothering with Sherwani now!!🤦🏻‍♀️🤷🏻‍♀️

Not only Reham but many others also rebuked the premier on his track-suit.

Appealing to the developed world in his… PJs? https://t.co/JSQB525Idg

Did the premier disrespect the world leaders?

Yes: he disrespects both the message as well as those he is appealing to by looking like he’s just got done with some exercise and didn’t have the courtesy to put on some clean clothes before making this “appeal”. But that’s just my opinion.

He is also disappointed

However, many on Twitter are supporting the clothes of Prime Minister Imran Khan.

PM’s supporters to the rescue

Ppl commenting on how much Imran Khans clothes are worth are just as petty as those who were taking screenshots of NS’ wristwatch and Hina Rabbani Khars handbag.

A joke or 2 r fine,but v take it to the next level. FYI, many of those commenting on the price own similar clothes

The fact that they have nothing else to criticize other than Imran Khan’s clothes shows how devoid the resistance’s arsenal is. How desperate their rhetoric is. How petty their existence is. No amount of emojis can hide these facts.

Tip to Insafians,,, revel in their misery!

He is showing modesty not a show off like you !! Wearing clothes that reveal your body.our prophet was the biggest leader of mankind & how did he dress when he met statesmen,kings,dignitaries & people from different clans.very modestly ! Imran Khan has respect you dnt

This Man is here appealing World leaders to give some relief in the debt so that we could use the reserves for the protection and cure of Pakistanis and Pakistanis are fkn making fun of his clothes? Imran Khan doesnt deserve this disrespect sorry @ImranKhanPTI hum sharminda hein https://t.co/MnL5siSALV

Journalist Mahim Maher thinks he was wearing a Ralph Lauren Polo for £139.

People reacted with mixed reactions, however, many supporting Prime Minister Imran Khan supersede those who are against him. The primary matter of the time is Pakistan is out of funds and needs money to counter the pandemic. We hope the message has been sent across properly to the world.